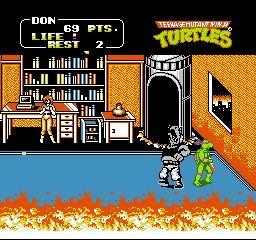 After the crushing disappointment of the first Ninja Turtles game for NES Konami had to make it up to gamer’s big time.  What made it even worse: the first arcade game had been released around the same time, giving gamers the exact gameplay they were expecting.  So it makes sense that for the follow-up they would port said game and fulfills everyone’s wishes.

Teenage Mutant Ninja Turtles II: the Arcade Game was released in 1990 to the delight of gamers everywhere.  A beat em up like Final Fight and Double Dragon, the arcade game was everything we expected and then some, featuring a never ending supply of cameos from the cartoon, 4 player co-op and your choice of Turtle, each with subtle differences.  I can remember spending illegal amounts of money playing the game every week with friends and strangers alike as I was fully entrenched in Turtle mania.  The NES port, while not arcade perfect is well done and succeeded in washing away any lingering memories the first game had left.

You’ll fight an endless supply of Foot Soldiers and other nemeses from the Ninja Turtles fiction as you make your way through each of the levels as your favorite Turtle.  The arcade game was better able to depict the differences between each character, with Donatello slow but powerful with insane range, Leonardo perfectly in the middle, etc. The home port makes all of the characters virtually all the same with the only object of note being their bandana color and signature weapon.

Aside from the enemies the world is littered with objects you can use to your advantage, such as fire hydrants, street signs, traffic cones, etc.  Normally fighting the same enemies over and over would quickly become boring but there are enough varieties of Foot Soldier that you never feel like you are going through the motions, with each type forcing you to switch up your tactics.  The bosses are exactly what you would expect: powerful, cheap, and true to the cartoon.  In every way the game was a treat for the fans.

Some changes had to be made to fit the game into the limits of the NES.  The – player coop is missing, limiting you to 2 players.   That comes as a mild blessing all things considered, I would hate to see what the game would look like if they even tried.  The levels have undergone surgery, removing some elements and extending their length for a longer lasting experience.  Obviously the graphics and voices have not come over fully intact, but the game is still a very nice approximation of the arcade game.  Most importantly it is a drastic leap in quality over its predecessor.  I really miss the speech from the arcade game; even though it was a bit sparse it added to the overall atmosphere.

As compensation for these changes are 2 original levels created specifically for this port.  Both are excellent and match the quality of the rest of the game and in my opinion even exceed it as they were designed around the NES’ limitations with excellent graphics and unique challenges that would have fit in perfectly with the arcade game.  The arcade game was a bit challenging which comes as no surprise since it was designed to suck quarters.  The home port evens the odds by offering more lives when you start, limited continues, and extra lives for every 200 points scored.  While it is still taxing it remains manageable.

So in the end would I recommend it?  With some reservations, yes.  Back in the day when the thought of owning the arcade cabinet was ludicrous this home port was everything you could ask for.  With the advent of more powerful hardware now you can buy an arcade perfect port for numerous digital download services and cheaply too.  The only thing on offer here are the original stages and as good as they are they aren’t worth the price of admission.  That’s not to say it isn’t worth playing, just that if you really feel like experiencing the arcade game in all its glory the option is there.