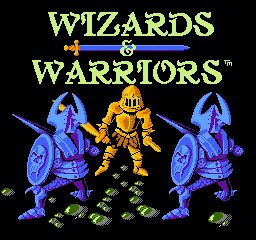 Every so often as I take my daily trips down memory lane with retro video games I come across a game that I initially look back on as a classic.  However once the controller is in hand I discover they’re anything but.  You could argue that Wizards and Warriors is classic but then my question would be”have you played it recently?”  Because if you had you would see it for what it is: a sloppy attempt at an ambitious adventure.

Wizards & Warriors was developed by Rare and released by Akklaim in 1987.  The evil wizard Malkil has kidnapped the Princess along with her hand maidens and taken over the kingdom of Elrond.  The Knight Kuros is the only one brave enough to face him.  The awesome box art promises a grand adventure full of demons and magic and in that category Wizards & Warriors delivers.  However the execution of its numerous features doesn’t match its technical brilliance (for the time).

This is the literal definition of the word platformer.  Every level, whether it’s a forest, fiery cave or castle interior is a complex series of platforms both big and small that you’ll have to navigate.  The primary goal is to collect a set number of gems to bribe the knight guarding the entrance to each level’s boss.  That goal is easier said than done.  The levels become more and more intricate with an army of monsters ready to swarm you at every turn.  Literally.  They don’t stop.  Helping to navigate each level are doors that lead to or warp you to other sides of the map, most requiring a blue, red, or pink key.  The other is the massive inventory of items you will undoubtedly amass.

There are quite a lot of secondary items to use spread out over the course of the game in treasure chests.  Some are passive, such as the various shields, to the more active and essential, like the Potion of Levitation. Some replace others and unfortunately unless you know which exact chest they are located in you can accidentally lose an important item for long stretches or even permanently.

While a lot of the weapons sound cool in practice they are useless or even worse, don’t work.  Losing the Boots of Force (which allow you to kick open treasure chests) for the stupid Staff of Power sucks hard.  The most famous example of an item that doesn’t work is the Cloak of Darkness, which allegedly makes you invisible to enemies; instead it makes Kuros invisible to you while the enemies still attack en mass.  Another is the Boots of Lava Walk; you still take the same amount of damage as before and they’re only useful on one level.  Lame.

As much as the game has going for it it’s let down by the controls.  They are sloppy.  Although Kuros is controllable in the air it doesn’t stop him from slip sliding around.  Because the vast majority of the platforms are so small landing on them is usually a roll of the dice.  Your basic attack, if you can call it that, is pathetic.  You don’t so much swing your sword as waggle it an inch in front of you; trust me it looks worse than you’re imagining.

Because of all these factors you’ll take untold amounts of damage from the relentless onslaught of enemies.  Death comes frequently and I believe that’s why you have unlimited continues.  While you still have to at least work your way through the game it’s a bit too generous.  You pick up exactly where you died, and even in boss fights any damage incurred stays, so the game can be brute forced if you are determined enough.

If they could have polished the game even a little more than this really would have been a classic of that era.  As it stands now it’s a bit too frustrating to be considered for that status.  It’s decently fun if you can overlook its issues just know that they are many.