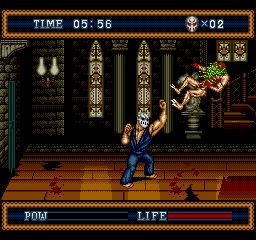 Now this is more like it!  After the mediocrity of Splatterhouse 2 I don’t think anyone really expected much from part 3.  Kudos to Namco for going above and beyond to make it the definitive game in the series by largely starting over from scratch and abandoning most of the series’ tropes.

Splatterhouse 3 was released in 1994 for the Genesis.   Rick and Jennifer are now married and have a son named David.  Using his wealth Rick has also bought a mansion that the family now lives in but evil is not far behind.  Evil has invaded his home and Rick once again dons the Terror Mask to save his family.  While the Terror Mask is supplying you with the power necessary to fight the demons it does seem to have an agenda of its own this time…..  Throwing out most of the gameplay elements of the first two games Splatterhouse 3 introduces new elements to the series to create a better product overall.

The first thing you’ll notice is the removal of the strict side scrolling playing field.  Much like any other brawler you can move around for better positioning to attack enemies.  Your repertoire of moves has been expanded to include head butts, throws, roundhouse kicks and more, fixing the largest flaw of part 2.  Your life bar is just that: a real bar.  Come on, let’s be honest, the pathetic 4 hearts of previous games was bullshit.  The eldritch orbs that litter the environment fill your power meter and once activated transform you into a hulking He-Man, with new moves to slaughter enemies.  The strongest attack causes your flesh to explode in all directions; it’s pretty gruesome to see.  You’ll notice a timer has been added which leads to the game’s biggest innovation – the non linearity.

Although the game is broken down into 6 stages you have full freedom to choose your own path through each level.  After clearing each room you have a choice of which route to take and can check the map of each floor to plot your course.  Dead ends usually have power ups or weapons making it worth your while to at least try to explore.  The timer however will temper your curiosity.  Depending on the level if time runs out something bad will happen, making it crucial for you to be efficient in your progress.  There are 4 possible endings governed by your actions giving the game much replay value.

The graphics are phenomenal but that is one department the Splatterhouse series has never slacked.  Even so the level of detail is insane, with a new set of beasts to pummel and more varied environments to fight in.  Some of the levels take place outside the mansion giving you a reprieve from hallways and bedrooms.  The digitized photos used for the cut scenes are still impressive even today, too bad there aren’t more of them.

Any way you slice it this is far and away the best game in the series.  The new gameplay elements flesh out the series perfectly and fans of blood and gore will be happier than a cat in heat.  This could have served as the basis for further games but in the end it would be the last one (well up until last year but the less said about the new game the better.).  At least it went out on a high note.