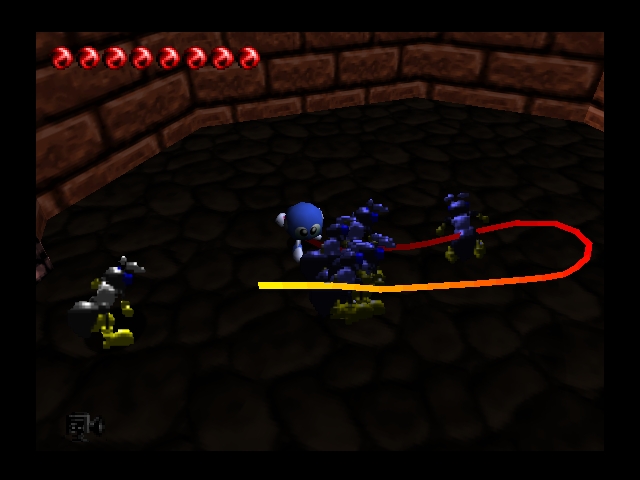 To a legion of gamers the analogue stick has always been the preferred method of control in video games.  To them it always existed.  But that isn’t the case.  Those of us who have been at this hobby for 2 decades or more remember the early years of the Playstation and Saturn.  3d games were a bitch to control with a d-pad.  The N64 and its controller promised to usher a new era for 3d gaming with its odd 3 pronged controller and one of the earliest games that showed that promise was Chameleon Twist.

Chameleon Twist was released by Sunsoft (R.I.P) in 1997.  Oddly mirroring Alice in Wonderland, you are Davy (or one of his friends), an ordinary chameleon who watches a rabbit ripped straight out of Lewis Carroll’s classic tale disappear in a portal.  Following him Davy is now anthropomorphized and seeks a way back home.  Imbued with a unique set of play mechanics Chameleon Twist sadly doesn’t have the production values to match its gameplay and ends up mediocre overall.  But it at least gave us a look at the future.

Davy’s prehensile tongue forms the basis of the gameplay.   Capable of many feats your tongue is your lifeline and best friend.  The primary form of attack comes from swallowing enemies and spitting them out, machine gun style.  The tongue can stretch for extremely long distances and also doubles as a means of transportation.  From latching on to poles and swinging around, to a pogo stick, this is the type of mechanic that practically writes itself.  More importantly it couldn’t be accomplished with a d-pad, no way in hell would any sane human being even try, you’d end up with blisters the size of walnuts.  The analogue stick offered a level of precision that was unmatched up until recently.

For the most part the level designs follow suit and challenge you to think a little more than the average platformer.  There’s a steady progression in how you’re asked to use your powers but ultimately Chameleon Twist is a bit simple and flawed.  From the graphics and gameplay there’s a sense that the developers were almost too afraid to take on more than they could handle, and the game suffers for it.

The level themes come from the generic guide to platformers and for every ingenious use of the tongue there’s something that brings it down.  The biggest culprit is the camera.  Although you can rotate it there are far too many scenarios where that isn’t possible and you are left to blindly flail around in hopes of finding where you need to go.  Depth perception is an issue when it comes to measuring how far you have to stretch your tongue to reach a pole or platform.  For a game that relies heavily on its unique “hook” the camera needs to be near perfect to facilitate it and in this case it fails.  Fixed camera angles have never worked in full 3d platformers and Chameleon Twist is a prime example why.

It’s too bad the developers were not up to the task of surrounding the at times brilliant gameplay with a suitably interesting world to match.  It isn’t a complete bust however; Chameleon Twist is simple but fun in spite of its issues and the fact that relatively unknown developers were able to create and execute such a good concept bode well for the future.