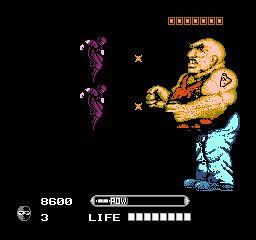 There aren’t too many games that I hate as much as this one.  Wrath of the Black Manta just screams rip off to me in every single way.  There’s nothing inherently wrong with that mind you; some of the best games ever made were……”inspired” by others.  But there’s just something about this one that is just so cheesy (but not as bad as the original Japanese version oh man) that gets under my skin.

He looks like a homeless dude dressed in rags.

Wrath of the Black Manta was released by Taito in 1989.  Crime is on the rise with child kidnappings the highest.  The Black Manta is sent on mission by his master to find clues to their whereabouts, rescue them, and defeat the ringmaster behind it all.  Heavily altered for its US and European release Black Manta is more serious than its weird ass Japanese cousin and a better game for it for what it’s worth.

Much like Shinobi you have throwing stars for distance and a short sword for close range attacks.  Getting behind an enemy will allow you to put them in a choke hold to learn information.  Like Ninja Gaiden you have access to ninja magic, with an ever increasing arsenal that you learn after every level.  You can equip 4 for every level and there’s enough choice that everyone will find something they like.

There are loads of secret rooms that usually house the children that need to be saved although it isn’t mandatory.   And it’s way too easy.  Any time you enter a room and clear the enemies you receive nearly half of your life back.  About the only challenge comes from the bosses, especially the final boss that needs to be killed using four specific spells used in a certain order that the game doesn’t fucking tell you.  Yes I’m bitter.

As much as they tried to play it straight the game is corny as hell.  Putting thugs in the choke hold results in some of the most hilariously bad interrogation scenes.  Seriously these bad guys look like something straight out of the 70s with their afros and jerry curl haircuts.  The actual text itself is rarely any better.  The children that you save look more like adults and the Black Manta lays it on thick with the anti drug message.  Even the scenes that are supposed to be cool like the flying on a kite look more like you’re strapped to a floating bed.

The US version is missing a level and replaces most of the bosses but this is just the tip of the iceberg in terms of differences between the two.  The Japanese version, Ninja Cop Saizou, is bat shit insane.  All of the cut scenes are drawn in an exaggerated anime style that borders on retarded.  This extends to the bosses as well.  By the time you start fighting floating eyeballs you know the designers stopped giving a damn.  Then they not only jump the shark, they turn around and devour it when the final boss turns into a fucking alien. Yeah, clearly they had it all planned out.

Whether you’re genuinely interested in the game or just want to see the insanity don’t bother.  There are legions of ninja games better than this.  Hell if you like your ninjas crazy Ninja Baseball Batman (http://www.youtube.com/watch?v=Kb4-1G4Tc-I&ob=av3e) might be up your alley.  Yes that game is real, and yes, it’s god damn awesome.  Planet Earth is a much better place because Ninja Baseball Batman exists.