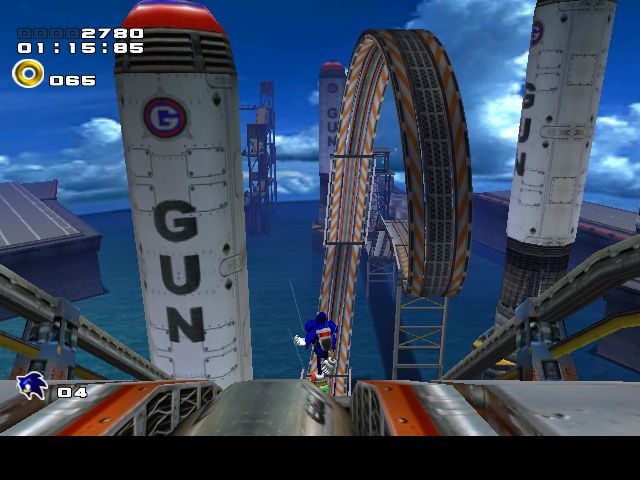 To celebrate the tenth anniversary of Sonic the Hedgehog Sega pulled out all of the stops in creating Sonic Adventure 2.  Though their venerable mascot had seen many highs and lows there was a resurgence in popularity due to his previous adventure.  Keen to capitalize on that his second Dreamcast adventure was given all the time needed to become a classic.  In the end does it reach that lofty goal?

Sonic Adventure 2 was released in each respective territory on the anniversary of the original Sonic the Hedgehog’s release.  Told from either the Light or Dark perspective, Dr. Eggman has discovered a secret weapon created by his grandfather, which turns out to be Shadow the Hedgehog.  Teaming up the two plan to take over the world using the power of the Chaos Emeralds.  Far more plot heavy than previous games the story serves its purpose in propelling the action forward but is the least of the additions to the game.

Choosing the Light or Dark path shows the game for each perspective but the gameplay remains the same, just with different characters.  Shadow, Rouge, and Eggman play identically to Sonic, Knuckles, and Tails respectively.  With just 3 characters a lot of the extraneous bullshit from Sonic Adventure has been removed, such as fishing with Big the moron and the game is much better for it.  Instead of a hub world the game is chapter based and switches between the 3 characters after every level.  In addition you can also change between the Light and Dark path at any point.  Much like the Trinity Sight System of Suikoden 3 this will allow you to see where certain events fit in the overall story and is actually pretty cool.

The Sonic levels are exactly what you expect; a roller coaster ride of action set pieces only now the levels are bigger, more tightly focused and as a result fix most of (but not all) the flaws of the first game.  All of your moves are available from the start and the levels are designed with speed runs in mind.  Knuckles and Rouge search for pieces of the Master Emerald, reminiscent of his levels in the first Adventure.

Tails and Eggman don mecha suits and turn the game into a pseudo Panzer Dragoon style shoot em up.  Sega kept the varied gameplay styles from Sonic Adventure while ditching the lame characters and created one contiguous adventure as a result.  It can be jarring to switch right when you’re getting in the groove with a particular character but largely it works.

Despite all of the additions Sonic Adventure is a largely uneven journey.  The Sonic /Shadow levels are undoubtedly the highlight, with extremely awesome scenarios and expert level design.  The unacceptable number of glitches that marred Sonic Adventure are mostly a thing of the past, leaving one of the strongest quests in the 3D iterations of the series.

However unlike the first game the quest is split evenly between all 3 characters; you’ll spend at least 60% of Sonic Adventure as Sonic or Shadow, which is the way it should be.  It wouldn’t be so bad if there weren’t so many problems with the remainder of the game but they serve to highlight its biggest issue: once again, the camera.

Because you can climb any surface as Knuckles the camera has no idea what the hell it wants to do and tries to follow you as best as it can which isn’t much.  Another complaint in these levels is the confusing directions.  You have a gem that beeps when you are close to a shard and that’s it.  It’s up to you to determine what direction to follow, leaving these levels as long tedious distractions at best.

As Tails or Eggman you spend the majority of the time in cramped spaces, with the camera unable to decide how far away or close it should be.  Luckily it isn’t so crucial in these parts that it leads to unnecessary deaths but there was a very vocal contingent among the press and fans about the camera and they ignored the complaints.  You can’t tell me everyone at Sega failed to notice it; its blatantly obvious.

As beautiful as Sonic Adventure was part 2 smokes it in every category, textures, framerate, speed, effects, it’s no comparison.  The crisp 60 fps rarely ever dips and you’ll be grateful for that as you blaze through the eye popping scenery.  The effects have also seen a similar jump, with exceptional lighting and texture work.  This is clearly one of the pinnacles of Dreamcast development.  The soundtrack however is not as strong, with next to no vocal themes (a plus depending on which side of the fence you’re on) and more guitar heavy tracks.  The voice acting has also been improved and is competent, if not decent.  You won’t see as much dodgy lip synching thankfully as well.

Even with all of its flaws Sonic Adventure 2 is one of the strongest 3d platformers in the series.  There are a ton of extras, with an extensive amount of multi-player modes and optional secrets to uncover once you’ve learned new moves for each character.  Plus the true ending is absolutely worth pursuing, something you can’t say about most games.  Altogether it will take anywhere between 12-20 hours to complete and that’s minus the extra content.  Can you really ask for anything more than that?  This was  a fitting swan song for the franchise on the Dreamcast as it moved on to rival platforms and I’m glad Sega did their mascot proud.