Top Players Tennis NES Game Cartridge
Top Players’ Tennis was released for the NES in 1990. Home Data developed the game and Asmik published it. The game’s cover features Ivan Lendl and Chris Evert, who are both tennis champions and who were both ranked at one time number 1 in the single players rankings. Players can also use an NES Four Score or NES Satellite to have four players simultaneously. The game will have Singles mode for a player to play against another player or computer, Doubles to have two on two, and one player versus two other players.
During the Singles mode, the player will choose either Evan Lendl or Chris Evert to go on a tour. the player can also develop their own player for the tournament. There will be four different Grand Slams the player can compete in, which are U.S. Open, French Open, Australian Open, and Wimbledon. The player will need to first win a qualifying tournament called Asmik Open. If the player decides to go solo, they will distribute points into different skills. These will include technique, concentration, agility, strength, stamina, speed, and the miracle shot ability. After enough qualifying rounds are won to have a high enough ranking, they will proceed to one of the Tournaments. As the player wins tennis matches, their character will earn points, making them stronger in their skill levels.
UPC: 0-96066-89001-3
Platform: NES
Players: 1-4
Condition: Used
Genre: Sports
Region: NTSC (North America)
Rating: Everyone 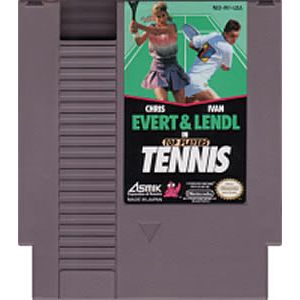