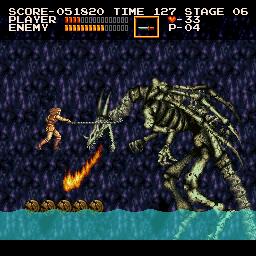 In the last days of the PlayStation Sony more or less stopped giving a damn about what was released and as such many publishers used it as an opportunity to release terrible games at budget prices.  It’s downright fascinating just how much of this cheap crap went on to become record best sellers.  Spec Ops is the epitome of this as it went on to sell well over a million copies despite being a buggy mess.  However there were a few curiosities released in this crop, and one of those was Castlevania Chronicles.

Castlevania Chronicles was released in late 2001 for the US.  Dracula has been revived by his followers and it’s up to Simon Belmont to put him down once again.  Originally released for the Sharp X68000 PC in Japan this installment was never released in the US but will be instantly familiar to long time fans of the series.  The first NES game took many of its level design cues from this “lost” chapter in the series.  While it isn’t the best game in the franchise it is still worthwhile to fans craving more traditional Castlevania action rather than the “Metroidvania” formula the series has since adapted.

There are 2 modes available.  Original mode presents the game exactly as it existed on the X68000.  If you’ve played any game in the series you know what to expect.  You wield the Vampire Killer whip against an assortment of undead foes and collect items that drop from candles.  Structurally this is similar to the first NES game, with similar level layouts and bosses.  Even more so than just that game it seems certain levels from later games in the series were either directly inspired or patterned after this game.  It does mean that those who have followed these games for any length of time will more than likely breeze through this mode as it will have an air of familiarity.  For new fans it will seem unforgivingly punishing as the difficulty spikes midway through the game.

The Arranged Mode is an alternate version of the game and features the bulk of the additions to the game.  The CG intro is just the beginning.  Simon has been redrawn in the style of series artist Ayame Kojima, and some background elements have seen a slight facelift.  The music also follows suit with a rearranged soundtrack.  But most importantly the difficulty has been balanced to be fair; the original game was quite hard in that NES way.  Now it’s actually doable without banging your head against the wall.  The Arranged Mode is more about balance than radically changing the game and it succeeds at that goal.

For all of the additions though it still can’t overcome the fact that this is a port of an old game.  It isn’t very long and although the challenge is steep you’ll still finish it one sitting.  The same can be said for the arranged mode.  Once you’ve finished the game there’s no reason to replay it again as the journey isn’t so mindblowing that you’ll want to experience it more than once.  There are some unlockables for completing the game such as artwork and an interview with series producer Koji Igarashi but that’s about it.  Replay value is not a priority.

While Konami did at least attempt to spruce up the graphics and sound it doesn’t hide the fact that this is an old game and looks the part.  Coming years after the resplendent Symphony of the Night has done this game’s staid presentation no favors.  This is a throwback in every sense of the word and while I can appreciate the effort to preserve the game as is it pales in comparison to the 2d efforts released even in the same year.

You can’t fault Konami for not doing more since this was a budget release and they could just as easily have passed it over considering the time of its release.  For fans of old school Castlevania this will scratch that itch but it doesn’t touch the finest in the series.  It is a bit hard to find so be prepared to pay a decent amount to get your hand on it.