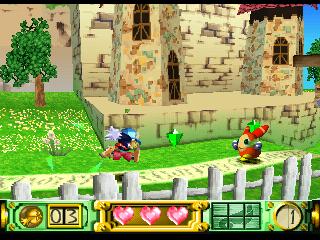 In the early days of the Playstation era no other third party was crucial to Sony’s success than Namco.  Their (near) arcade perfect ports of Ridge Racer and Tekken not only helped spur console sales but were excellent showcases of the hardware, especially at a time when Sega had crapped out sub par versions of their own flagship arcade games, Virtua Fighter and Daytona.  While not known for their platformers in 1998 Namco decided to stretch their creative wings and would create one of the single best platformers the Playstation would ever receive.

Klonoa: Door to Phantomile was released in the US in early 1998.  Set in the land of Phantomile, the world is powered by the dreams people have at night.  Klonoa, one of the denizens of Phantomile, is unlike everyone else in that he can remember his dreams, with one in particular coming true.  An airship crashes into a mountain, and upon investigating with his companion Huepow, they run into Ghadius and his minion Joker stealing Lunatia’s songstress Lephise.  Like any good hero Klonoa and Huepow set out to rescue her.

Klonoa would help to coin the phrase 2.5d platformer since you do not have full 3d movement despite the world consisting of polygons.  With its sublime gameplay and superb graphics Klonoa was released to universal acclaim worldwide and remains one of the top rated games for the Playstation, even despite its low print run.

Klonoa was definitely an exercise in character informing gameplay.  Resembling an anthropomorphic dog, Klonoa would have fit in perfectly with the rest of the mascot greats of the 16-bit era.  His floppy ears serve as his distinguishing characteristic as well as the primary gameplay mechanic.  By using his wind bullet, Klonoa can inflate and grab enemies and carry them using his ears for a number of purposes.  The most common use being a springboard to jump higher.  The enemies you grab can be thrown to eliminate creatures, walls, and even objects in the background.  Although the game is 3d movement is restricted to a 2d plane.  This allows for the same level of precision gameplay as the platforming legends of the past while also offering the graphic pizzazz needed to keep gamers’ attention.  The gameplay seems simple at first but the depth comes from the ingenious level design.

Restricting movement to the 2d plane allows for some crafty platforming on the level of the Mario games.  The nature of the levels will force you to pay close attention to what is going on in the background at all times since you might need to throw enemies at a switch or crate to proceed.  These moments are awesome in that you’ll reach seeming dead ends and will comb the level only to realize that box with an X in the background is virtually screaming “hit me”.  This is double edged: it teaches you to be aware of your surroundings while at the same time familiarizing you with the layout and making you aware of the secrets.  The secrets are many and all expertly hidden.  The complexity of the environments increases at the same pace as your skills so the designers can throw crazy platform scenarios and even boss fights at you and you won’t even blink.  Pandemonium, a similar game released a year or so prior attempted this but Klonoa perfected it.

Namco, next to Square, usually pushed the Playstation to its breaking point and Klonoa follows in the footsteps of Tekken 3 and Ridge Racer 4.  This is some of the finest 3d attempted on the console, hands down.  Nearly all of the flaws associated with the Playstation such as screen tearing, jaggies, and warping have been eliminated, leaving a beautifully crafted and designed world to explore.  The world of Lunatea has an ethereal quality to it, and even common environments such as forests and caves look like nothing you have ever seen before.  The shifts in perspective and rotation of the backgrounds never cease to amaze, enabling you to see angles of the environment that would otherwise go unnoticed.  And this is all running at a perfect 60 frames per second with no drops, a feat rarely seen on the system.  You almost wonder why Namco did not make more games like this, considering they were so good at it.

This is one of the best games for the Playstation, let alone one of its best platformers.  While it did not receive the popularity it deserved, it went on to form something of a multimedia empire in Japan, and spawned numerous spinoffs for various handhelds.  The game received a limited print run in the US so for a long time it was hard to find.  Now however it can easily be bought on PSN, and also has an excellent remake for the Wii, bringing the graphics up to modern standards.  Either way, do whatever it takes to play this game, they don’t make them like this anymore.