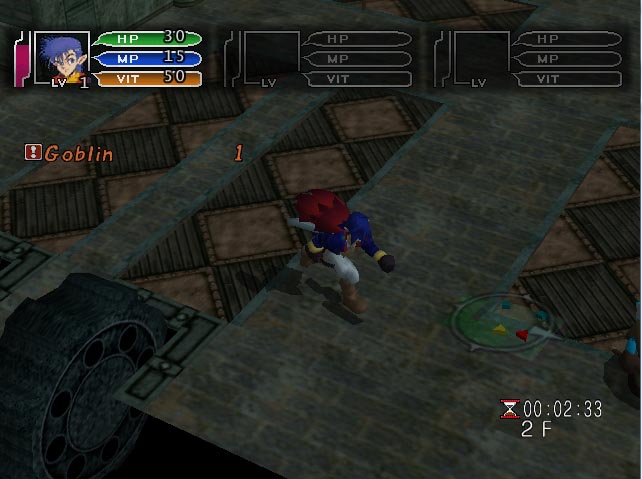 I can’t count the number of times when I was younger that I imagined what it would be like if all of Nintendo’s characters starred in one game.  Can you imagine?  Link rubbing shoulders with Mario and Samus?  Of course in my mind I was also there too but so what if it’s corny, I was 8.  Climax, developers of many a classic such as Landstalker had the same idea and while it isn’t as awesome as what I envisioned it still worth a try if you are into rogue-like RPGs.

Timestalkers was released for the Dreamcast in 2000.  Sword (they didn’t even try man!) is pursuing an unknown assailant who ducks into a clock tower to escape.  Pursuing him into the tower, rather than his quarry he finds a book that bathes him in light and transports him to another world.  This world is comprised of pieces of other worlds and still growing, leaving Sword to find a way home.  As one of the first RPGs released for the Dreamcast Time Stalkers had a lot of expectations behind it.  Everyone was interested in what a “next gen”  RPG would be, and its developer, Climax, had created many RPGs for Sega’s consoles.   The prolonged development schedule should have been the first signs of trouble, and while it isn’t completely broken it does keep the game from being as fun as it should have been.

The majority of the game takes place in the randomly generated dungeons and it’s here the standard rogue rules apply.  You are only allowed to bring 4 items into a dungeon at the start and upon completion or leaving are brought back to level 1.  You can only bring one character into a dungeon at a time; your other 2 character slots are occupied by monsters you catch and train to fight alongside you.  Combat is menu and turn based unlike the real time combat most of these games employ.  The rules are pretty steep but nothing you won’t get used to.

Mechanically Time Stalkers is sound but in practice it falls apart.  It is interesting to see the contrast between each world segment and the playable characters all support different play styles.  You aren’t stuck with Sword as the hero; theoretically anyone you choose can be the main character.  But as interesting as the world’s premise is it isn’t compelling.  Every time you complete a dungeon a new chunk of world is added, bringing with it a new hero to control as well as NPCs.  However none of the characters ever change or grow throughout the course of the game.  Their personalities are consistent with the games they come from, which I guess is a plus but in that case you might as well just play the games they came from.  The game simply becomes repetitious: new land mass appears, recruit a new hero, complete a dungeon, repeat.  With such an interesting premise they should have done more.

The battle system presents its own set of problems, which is unfortunate because the dungeons are where you’ll spend the most time.  In battle the enemies and your party are broken down into 4 squares.   Every attack has a different range for both sides so making sure you can reach an enemy is important.  However some of your monsters can’t leave the square they occupy, in effect making them useless in battle.  Like something straight out of an 8-bit game if you attack an enemy and it leaves that square you miss instead of switching targets.  We left that archaic bullshit behind for a reason.  Because you lose all progress when entering a dungeon any skills you learn are unavailable until you reach the proper level again.  I suppose the random nature of the dungeons is supposed to increase the replay value but between the issues with combat and the atrocious camera I doubt you’ll want entertain the notion of a second play through.

Timestalkers received a lot of early press because of its graphics but in the end it’s a mixed bag.  The artwork and locations are oftentimes pretty if not stunning.  The texture quality at times is amazing and a definite step above the 32/64 bit games the industry had grown accustomed to at that point.  But these are contrasted with the blocky character models that are barely a step above the best N64 games.  The soundtrack on the other hand is fantastic with an array of character specific themes and nice range of different musical genres represented.

I’ve been a bit harsh on the game but it still is fun for at least one play through.  If only the unique premise were matched with suitable gameplay that was just as appealing.  And on another note, just what the hell has happened to Climax?  There’s been whole lot of nothing from them in recent years.