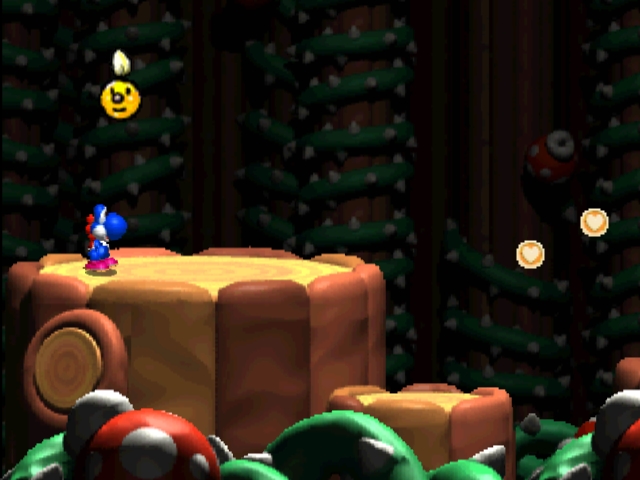 Absolute crushing disappointment.  That’s the only way I can sum up Yoshi’s Story.  You have to understand: this was the sequel to Yoshi’s Island, one of the greatest platformers ever made!  And now the next iteration was going to the N64, imagine what they could achieve with 64-Bits!  Well their vision and our imaginations took a huge fucking detour somewhere along the way because the game in question is boring as hell.

Yoshi’s Story was released in the US in March 1998.  The Super Happy Tree has kept the Yoshi population happy for generations but Baby Bowser in his jealousy steals it to make the Yoshi’s miserable.  Six Yoshi eggs survive and set out to retrieve the Happy Tree and bring sunshine back into their lives.  If it sounds kid friendly that’s because it was done on purpose.  The Story in the game’s title is taken literally, from the presentation to the plot.  Too bad they mean kid’s story because Yoshi’s Story is clearly meant for younger players, which isn’t bad in itself, but they clearly tried to bait gamers who loved its prequel with promises that this was more of the same.

Most of the abilities from Yoshi’s Island are present, which could have formed the basis for an exceptional game if not for unnecessary changes to the formula.  The structure of the game is the first major change.  The game is broken up down into 4 pages, each of which is comprised of 6 levels.  The goal of every level is to eat 30 fruit to advance to the next.  Fruit come in many varieties with varying point values as well.  Each Yoshi has a favorite fruit that will award even greater points when consumed.  And therein lies the problem.  It’s boring.

There is very little sense of danger in the game due to its structure.  There is no time limit and no Baby Mario to worry about.  While he was annoying Baby Mario at least created a sense of urgency if you were separated.  Here you are free to take your time avoiding enemies and being picky about the fruit you eat to maximize your score.  Since the levels cycle back to the start if you stray too far it reinforces that point even further.  At 6 levels per play through you can finish the game in an hour.  The levels on each page are ranked by difficulty with some measure of your performance determining which you’ll gain access to.  But the only thing that awaits you is more of the same lame gameplay.

At least it looks pretty though.  On this front you’ll hear no complaints from me.  The pre-rendered graphics echo Donkey Kong Country taken to the next level.  Rather than dipping into the cliché platforming well Nintendo decided to create levels based on different materials such as wood, denim, rubber and cloth.  And it works.  The varieties in art styles are a breath of fresh air for an at times stale genre and are still mind blowing today.  The special effects and animation also deserve mention, with many enemies that squash and stretch in ways you’ve probably never seen before in a platformer.  They definitely put the console’s power to good use.

If only the exceptional graphics were married to gameplay of the same standard.  This was clearly aimed at kids and there’s nothing wrong with that.  But they shouldn’t have bamboozled gamers into thinking it would be a prettier Super Mario World 2; I should know, I followed its progress back in 1997.  There’s no reason to play this other than to marvel at the graphics and you can use youtube for that.