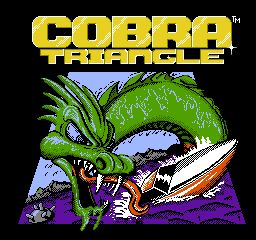 You know secretly I think Rare hated all gamers in the 80s.  They created so many classic NES games during that period (the actual number of games they made is somewhere around 60!) that were amazing but ball-bustingly hard.  Everyone knows about and has probably had their little gaming heart crushed by Battletoads but the subject of this review is also a member of that club.

Cobra Triangle was released by Nintendo in 1989.  There’s no back story, who the hell needs that?  You are a badass speedboat and have 25 stages to complete to reach the end, that’s all you need to know.  The similarities to R.C. Pro Am are immediate: both use the same isometric perspective and both are pseudo action games that feature weapons to pummel the competition.  However this isn’t a race to the finish like that game despite what some levels will tell you.  It’s more about survival, which the game does rather brilliantly.

Each group of 5 levels are broken up into multiple types with their own objectives.  Race to the finish is exactly what the name suggests, however you aren’t fighting for position, just staying alive to the end.  Dispose of mines pits you against a rival boat whose job it is to keep you from taking the bombs to the designated point for disposal.  Save the children places you in a grid full of children you must protect for a given length of time, one of my favorites.  Jump the waterfall is one of the most complicated, a simple title but the execution is of it is anything but.  Fry the monster is a good old fashioned boss battle like all good classics have.

You aren’t sent out into these levels unarmed either.  Cobra Triangle employs a Gradius like power up system to turn your ordinary boat into a veritable death machine.  Speed, firepower, missiles, turbo, and force can be obtained by collecting pods from rival boats or the bonus stages.  While it isn’t as advanced as Konami’s classic series it’s sufficient to get the job done.  Despite being able to upgrade some weapons even further such as homing missiles and the like it doesn’t make the game a cake walk.  Far from it in fact.

From stage 2 onward there is a sizable jump in the difficulty.  The ever present danger of the timer makes the already harrowing level objectives more nerve wracking.  It’s very easy to lose track of how much damage you’ve taken and die unexpectedly, which you want to avoid seeing as how extra lives are in short supply.  There are several tactics you can use to cheese your way through some levels; instead of trying to save all the kids why not take one and run down the clock (it sounds so wrong!)?  Or hide in a corner safely out of reach during boss fights?  Some of these aren’t so much clever as they are borderline mandatory for progression.  With only 2 continues only the best will ever see the end of the game.  But it’s a wild trip to get there.

Difficulty aside Cobra Triangle holds up admirably.  The variety in objectives keeps the game from becoming stale, the graphics and music are excellent, and most of all the game is fun.  I still wish there were battery backup or passwords, come on man how many times did they gloss over that in their games?  Fucking Rare.