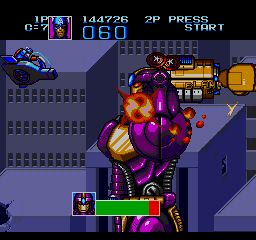 In the early 90s licensed beat em ups were all the rage in the arcade.  Capcom, Konami, and a host of other third parties spun gold out of such obscure licenses such as Buck O’ Hare and Asterix.  In 1991 Data East dropped the bombshell that was Captain America and the Avengers in the arcade and the world was never the same again.  Nah I’m just joking but the game was decent in its day with home ports to follow soon after.

The Red Skull has world conquest on his mind and brainwashes a veritable army of super villains to carry out his plans.  In response Captain America assembles a squad of 4 Avengers to take him down with the rest of the team held in reserve.  Personally I would have taken Thor instead of Hawkeye but what do I know, I’m not a superhero.  Originally a 4-player cabinet the home version strips that down to just two and while the game can still become chaotic at times it doesn’t hide the fact that it is a bit too basic to keep you entertained for very long.

Captain America and the Avengers was released for the Genesis and SNES in 1993 and I remember looking forward to the home conversions as this was the rare arcade game I actually managed to finish without breaking the bank.  My anticipation was misplaced however.  By the time the home ports arrived plenty of better brawlers had been released, leading me to realize that this game wasn’t anything special at all and that my pleasant memories from 2 years prior would have to suffice.

As one of 4 characters you fight the forces of the Red Skull in 5 levels of side scrolling action.  Captain America, Iron Man, Hawkeye, and the Vision all share the same basic move set with the only difference in their special attack which is extremely disappointing.  Even something as simple as different stats would have gone a long way toward adding some differentiation to the characters.  The ground is littered with objects that can be used to clobber your foes, from cans and park benches to vending machines.  Although the playable characters are limited to the above 4 a host of Avengers make cameo appearances to assist you.  Famous superheroes like Quicksilver and the Wasp to less popular characters like Wonder Man and the Sub Mariner are sure to bring a smile to a comic book fan’s face.

Sadly the gameplay is mediocre.  The game is highly repetitious; most beat em ups are but they at least keep things interesting by introducing new enemies.  Here you’ll fight the same set of generic robots and thugs in endless succession, only broken up by the smorgasbord of bosses and the lone attempt at variation, the brief shooter segments.   Even these segments fail to drudge up any excitement because they’re short and easy.

The only thing to look forward to are the bosses, which Data East has gone to town packing the game with. Chances are if they were even slightly popular they were included and I’d be lying if I said it wasn’t cool to fight the likes of Crossbones, the Mandarin, Klaw, and such.  You’ll look forward to these fights for another reason as well: the piss poor localization.  I just don’t get it.  How do you screw up the at most 1 page of dialogue in the entire game?  Laughable exchanges such as this are common place:

What the hell?  I could have done a better job with a Japanese to English dictionary!

There is no reason to bother with Captain America and the Avengers in this day and age.  How this was ported and far superior games such as Bucky O’ Hare, X-Men or Battletoads were left in the arcade I don’t know.  Of the two 16-bit ports the Genesis version is vastly superior.  The SNES version is missing the majority of the digitized speech, has busted controls, and is overall sluggish.  Were it not for the license this would be instantly forgettable.