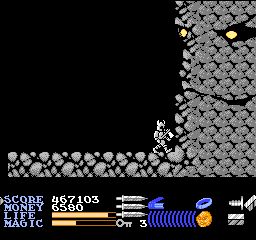 Despite its issues Wizards & Warriors became a hit and like all hit games a sequel was soon to follow.  It’s always interesting to see what direction a developer will take when it comes to following up a successful game.  Will they simply copy & paste a new skin and essentially create an expansion pack or will they go in a new direction altogether?  And which side of the coin does Ironsword fall under?

Ironsword: Wizards & Warriors II was released in 1989 by Akklaim.  The evil wizard Malkil has returned and is now using the Power of the 4 elements to take over the land of Sindarin.  Kuros takes up the sword once again to stop him.  Developed by Zippo Games for Rare they put their own spin on the series formula, enhancing some aspects but also making some even worse.  Whether Ironsword is a better game than the first is largely subjective however.

The intense platforming that dominated the original game returns, now however there is a larger objective on every stage.  Each of the 4 levels tasks you with finding a golden artifact to appease each level’s Animal King and gain access to the elemental boss’s domain.  In the second half of each level you must find the necessary spell needed to damage the boss and earn a piece of the Ironsword.  It’s a lot more structured than the original, which simply consisted of earning enough gems to fight the boss by any means, even skipping major portions of each level if you knew what to do.

Sadly the expansive inventory of items has been scrapped.  In its place are magic spells that can either be bought or found and more weapons and armor.  The inns scattered in each domain also sell these upgrades along with a bonus game to earn more dough.  I suppose this was done to add more depth to the game but it’s largely irrelevant.  Most of the time you have no idea what each spell even does and they aren’t necessary.  Even worse, they use up significant chunks of magic and are single use; that magic is better saved for the bosses.

Unfortunately they made no effort to improve the loose controls.  Kuros is just as slippery when platforming, which takes up the majority of the game.  Your standard attack is still just as useless; you’ll spend more time letting enemies run into your sword or avoiding combat altogether because of this.  The most important items you need to collect in every level are usually hidden in out of the way areas and your only clues are incredibly obtuse.

And what is up with the bosses and random enemies that kill you in 2 or 3 hits?  Most of these flaws were mitigated by the unlimited continues in the first game; you have no such luxury here.  You only have 2 continues but thankfully the developers showed mercy and added password saves.  If their goal was to make the game harder they certainly succeeded.

It’s too bad the flaws stick out so heavily because there is some serious technical wizardry going on behind the scenes.  The animation is a noticeable step above most games during that period and the soundtrack is another David Wise classic.  Whether or not that is enough to overlook the issues that should have been fixed in the 2 year gap between releases is up to you.  I’ve played through the game once or twice and while I enjoyed it for the most part I have no desire to go back, take that as you will.