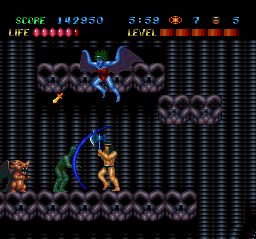 Talk about going as far to the left as possible.  What the hell happened here?  Legendary Axe was one of the few bright spots in the Turbo Grafx-16’s early life so when a sequel was announced everyone paid attention.   However what we got was anything but a follow-up but instead a lame attempt to ride on the success of the first game.

Following the death of the King and Queen Prince Sirius and Prince Zach battle to see who will rule the kingdom.  After losing to the evil Zach Sirius is on a quest to reclaim the throne.  You know that completely defeats the purpose of battling in the first place if you aren’t even going to let him rule rightfully but whatever.  It’s not like he cheated or anything.  What a sore loser.  Having no connections to the first game Legendary Axe 2 is only slightly similar in gameplay and ultimately inferior in nearly every aspect.

Ditching the caveman setting the game now has a Conan inspired theme with near naked barbarians aplenty.  Rather than the static axe that is upgraded over time you now have 3 weapons: a sword which you begin with, a morning star which can hit 4 directions, and the axe which trades reach for power.   For the “oh shit” moments you are also equipped with smart bombs.  If this sounds familiar its because the gameplay is identical to Astyanax on NES, which is also from the same creator.  The major change comes from the removal of the charging system.  Although it added a tactical element to combat it also slowed down the action and was more of a nuisance; now however the action is much faster and far less aggravating.

In another respect the reduced emphasis on platforming leads to less frustration as well.  I can’t count the number of pits and oddly placed jumps that the first game demanded, all with annoyingly placed enemies ready to knock you to your death.  In its place is a more straightforward adventure devoid of any of the problems the first game had but that kind of highlights the problem.

Although Legendary Axe had its issues it at least had character and an identity of its own.  It could be frustrating as hell but at least with some patience it was nothing you couldn’t overcome.  I feel the designers went a bit too far to fix its flaws and we’re left with a generic action game instead.  The bland graphics and theme do nothing to get your blood pumping.  The game is overly dark and sparse.  The backgrounds are flat and lack detail compared to the first game; if you were shown screenshots of both side by side you’d never guess this came a year later.  The levels late in the game start to become really weird, such as the slime pit and the royal palace, which has robots and resembles a spaceship.   It’s as though they couldn’t make up their minds what they wanted the game to be.

If you ignore the comparisons to the first game Legendary Axe 2 is decent I guess but there are much better games on the NES, let alone the same console.   I honestly can’t recommend this to anyone regardless of its pedigree.

I suppose this was supposed to set up the third game in the series but that never happened.