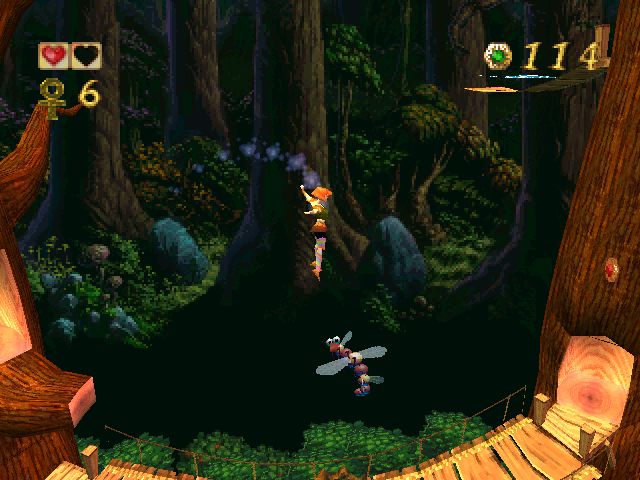 In the early days of the 32-bit era the majority of the development community floundered as they tried to figure out the best way to translate certain genres to 3D.  Through their years of working with the 3DO Crystal Dynamics certainly had a leg up on the competition but it’s still even so the quality behind Pandemonium is astonishing.  In one fell swoop CD released one of the best platformers of that console generation that still holds up today.

Magical Apprentices Nikki and Fargus are out having fun reciting spells from a book when they take things a little too far and summon a demon who promptly swallows their kingdom.   Without the skill necessary to summon him back the two set out to find the Wishing Engine to return the town back to normal.  Like Klonoa Pandemonium! is still set on a 2d plane although the world is made of polygons.  This enables the game to retain the tight precision platforming that defined the 16-bit era while offering exceptional graphics for the time.  Sometimes what’s old is new again and in this case Pandemonium! was a breath of fresh air amid a glut of poor games whose only selling point was their meager attempt at 3d.

The choice between Nikki and Fargus comes down to play style.  Nikki is equipped with a very handy double jump while Fargus has a cartwheel that can take out enemies.  The levels are structured so that either of the two is a viable choice so you’ll never feel compelled to switch at every point.  There are a wealth of powerups available, with the most frequent being the various fireballs, which either burn, freeze, or shrink enemies.  The treasures that adorn each level serve multiple functions; gather 300 for an extra life and collect 80% or above will grant access to one of 2 bonus levels, much like Sonic the Hedgehog.

Now that I think about it, the Sonic comparison is apt.  No you’re not rolling into a ball at breakneck speeds, I mean level design.  Each level has multiple paths with some that favor each character.  Then there are the routes that accessible only by skilled gamers who can chain together multiple bounces off enemies with suitable rewards to match.  Certain levels will transform you into different animals for extended periods and these sections are a riot.  The Rhinoceros can gore enemies on his horn but is powerless to stop the dinosaurs on his ass.  My favorite is being turned into a slow moving turtle before a nightmarish segment involving rotating saw blades.  When the developers are having fun so do we.

The levels are very trippy since the camera is all over the place to give you a wide range of angles to view the action.   But despite this it’s never intrusive and the variety in how you view each environment is part of what makes the game so fun.  No matter what angle the camera is tilted the controls are rock solid, a feat not too many early 3d games from that period can claim.  It also helps that they are simple but once again like the Sonic games it’s all about the implementation.  The challenge is perfectly balanced and ramps up steadily; health powerups are always handy at the exact moment you need them and it seems whenever a particularly tricky segment is coming an alternate path is available if you aren’t up to the task.  The time spent working on Gex surely benefitted this game and gamers reap the reward.

Pandemonium was exceptionally pretty in 1996 and still holds up.  The character models are chunky but that seemed to be on purpose; the backdrops are the star of the show.  Between the ever present camera switches you’ll receive views of the environment that are stunning and notice little details that would be missed if the game weren’t confined to one plane.  The lighting effects are extensive in both versions with the Saturn version lagging behind only in the transparencies.  This was a first class effort through and through.

While Pandemonium is a quality game it’s often overlooked, more than likely due to its cheery exterior.  Don’t let that stop you from sampling one of the better games released early on in the 32-bit era, especially if you’re a platform fan like I am.