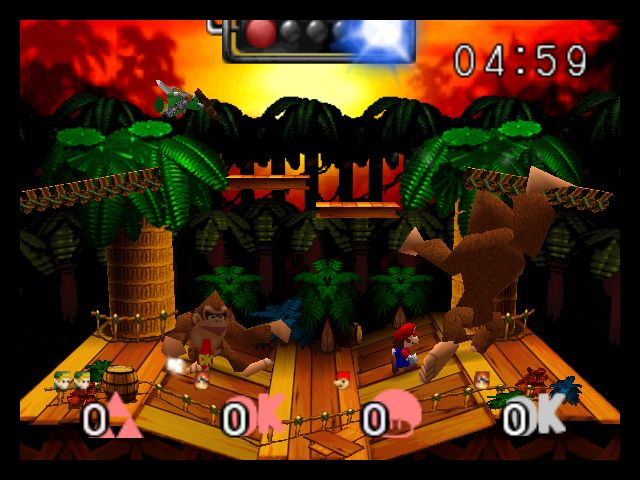 Nintendo has always excelled at taking genre’s they are not comfortable with and putting their own unique spin on them.  The Mario Kart series was born from this as an example.  So when word came of a fighting game starring their most iconic characters the gaming world lost their shit.  You could say it was a dream of many growing up and although everyone assumed it would be a straight Street Fighter rip off what we got instead is wholly original and a big love letter to the fans.

To more or less quell fears that Nintendo’s mascots had suddenly gone homicidal the game is presented as a series of toys that have come to life to fight amongst each other.  It’s a simple premise and it works wonderfully well as a means to bring so many disparate franchises for one brawl to end them all.  What is more interesting however is Super Smash genesis.  Begun as a series of tests with Nintendo characters in a new fighting engine it was billed as not commercially viable and wasn’t scheduled for release worldwide.  Can you believe that?  Cooler heads prevailed and we were graced with one of the most original fighting games created and a riotous party game that is still enjoyable to this day.

As the first game in the series the biggest all stars in Nintendo’s library of intellectual properties come to the fighting arena as well as some lesser known properties.  That means Link is rubbing shoulders with the Mario Brothers, Samus can chill in space with Fox and crew, and Kirby can show the Pokemon crew whose boss.  They even snuck in a few dark horses like Ness from Earthbound and Captain Falcon from F-Zero.  All told 12 playable heroes represent a wide spectrum of gaming worlds, more than enough to provide enough diversity in items and mechanics to last a long time.  The important thing is they grabbed the characters everyone wanted to see; imagine the shit storm if they left out Yoshi or Link!

Throw any preconceived notions of the fighting system; you’ve never played anything like this.  The object of the game is to knock your opponents out of the ring.  Sounds simple right?  It can be if you know what you’re doing.  Rather than a static life bar that depletes over time you have a percentage meter that increases as you take damage.  As it gets higher you fly farther from taking hits; by 250% simple impacts can cause an automatic KO.  There’s no limit to how high you can go either but by 300% you’re pretty much fucked.  It’s a highly original system that works hand in hand with the move sets of each character

The concept of special moves doesn’t really exist in Smash Brothers.  All characters more or less have the same basic moves, a projectile(s), a shield, and a multi-hit attack.  However the range and power behind these attacks make all the difference.  The Mario Brothers are not only well rounded but extremely powerful.  Jigglypuff and Ness require more thought behind their attacks but are equally effective in the hands of a “master” (that doesn’t sound right).  A gaggle of items from each gaming universe are randomly dropped and can both help and hinder you at the same time.  Some are offensive, like Fire Flowers (so powerful!) while others restore health.  They drop frequently enough that it keeps every battle interesting.

The backdrops serve as more than window dressing.  The layout of each stage can present many opportunities to screw over friends by trapping them behind obstacles and unable to climb back in the ring. A lot of thought went into each one and many are interactive, such as the rising lava on Zebes or the random wind in Dream Land.  And they look pretty by N64 standards as well.  Even the classic tunes are well done.  It’s one big fanboy nerdgasm and knows it and that’s why it works so well.

As accomplished as the play mechanics are the single player mode is lacking.  They do a good job of varying the fights , such as the battle against a giant Donkey Kong or Metal Mario however these gimmick fights are few and exactly the same every time.  The Bonus stages are excellent but once again there aren’t too many.  There are few unlockables to keep you coming back so it’s a good thing the multiplayer saves the game.  Plug in 4 controllers and watch the hours fly by.  The multiplayer is what this game was made for and it shows.  The sequels would go into fan overload with a ton of trophies and extras but at the very least this was a good start.