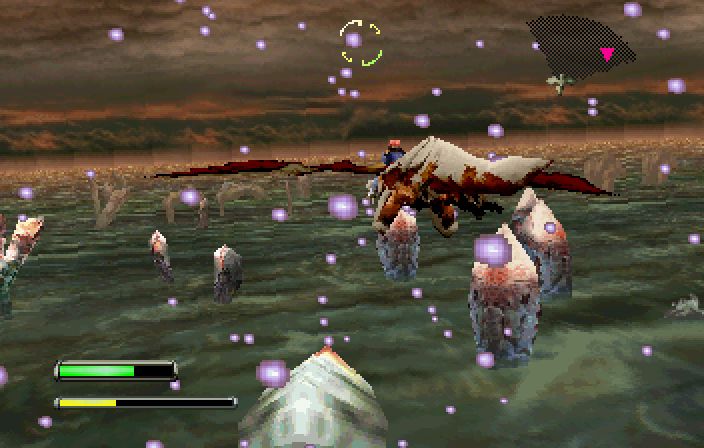 The beginning of the 32-bit generation was interesting to watch.  Most developers had never worked with 3d so it was interesting to see the experimental games that were created.  Sega had a huge advantage in that they had extensive experience with 3d due to their many arcade games, so when Panzer Dragoon sprang from one of their numerous development teams it wasn’t a surprise.  Sequels are always expected to expound on what made the first game great while offering more.  Even bearing this in mind the leap in quality between Panzer Dragoon and its sequel is astonishing.  To this day it remains one of the greatest rail shooters of all time.

In a rural village the superstitious townsfolk kill any mutant cooliats born with a green glow.  Lundi discovers a cooliat with wings and forgoing village tradition hides and raises it in secret.  Years later while teaching his dragon Lagi how to fly the Empire destroys Lundi’s village in an attempt to eradicate Lagi.  The chase begins to catch the Empire’s flying fortress Sestren and enact revenge.  Better than its predecessor in every way Panzer Dragoon Zwei is one of the best titles in the Saturn library with excellent graphics and deep gameplay to match.  There is literally no reason anyone with even a passing interesting in shooters should pass this up.

Unlike the original you start out on the ground.  That’s right, as cool as your dragon is he does not have the capability to fly immediately.  These ground levels serve as a welcome introduction to the game’s play mechanics without holding your hand every step of the way.  You still move along a fixed track and have free reign to position the camera in all 4 cardinal directions.  The lone addition to your arsenal is a berserk meter that slowly fills up as you wreak damage on enemies.  At any time you can cause your dragon to go ape shit and release a continuous stream of lasers at everything under the sun until it runs out.  It’s highly effective against bosses or those oh shit moments when you’ve ignored your radar.  Between your standard blaster, lock on lasers and berserk meter you are more than equipped to deal with the forces of the empire.

The action is even more intense this go round; it’s assumed that you’re at least somewhat familiar with the series but not to the point where it’s overwhelming.  Whereas the first game was a bit reserved with its enemy waves no such qualms exist this time out.  You’ll need to watch the radar like a hawk because a group of indigenous life can spawn behind you at a moment’s notice.  The level designs also show less restraint; the majority of the time the road to the end level bosses is full of many twists and turns which are also part of the game’s added depth.

Nearly every level has one or two alternate routes which not only affect the enemies you’ll face but the evolution of your dragon.  At the end of every level you are graded on a number of factors and awarded evolution points.  The number of points amassed as well as the paths taken through each level affects how your dragon will evolve in terms of size and strength.  Not only does it encourage you to do your best on at all times it adds to the replay value as well.  The only black mark I guess would be the brevity of the adventure; at 7 levels it doesn’t last too long but with separate paths as well as the Pandora’s Box that is unlocked you’ll revisit this classic many times.

By 1996 developers were settling into working with 3d and so the technical leaps in quality were a sight to behold.  Even taking that into consideration Panzer Dragoon Zwei is a generational leap in quality. The bio-mechanical enemy designs have increased in size and scale while the sharper texture detail caused no hit to the frame rate.   The Saturn’s 2-d capabilities are used in conjunction with the 3d to great effect, most notably the forest of level 3 and the snowy plains of level 5.  There are some weak effects here and there; the Saturn’s lack of hardware transparency rears its ugly head at different points such as light shafts or what is supposed to be transparent water.  But compared to the flawless art direction it’s not worth mentioning.  The atmospheric soundtrack matches the action perfectly, and fades out at select moments when necessary to emphasize crucial moments.  I would say it matches Panzer Dragoon Saga artistically but not in scale.

This is hands down one of the best games released for the Sega Saturn.  It shouldn’t run you more than a few bucks so there’s no reason to skip one of Sega’s finest endeavors.  If more rail shooters were released and of this quality I would be a happy man.