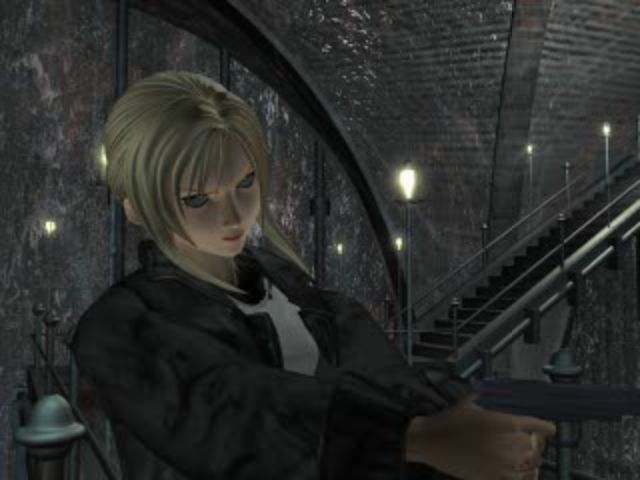 For the longest time Square games were some of the best rpgs you could find on both sides of the Pacific.   They released far fewer games in the US than Japan but the majority they did were of the highest quality.  In Japan however they were extremely prolific, unfortunately some of their best output was left stranded overseas.  In the wake of Final Fantasy 7’s massive success every publisher under the sun jumped on the role playing bandwagon and attention fell on Squaresoft to see if they would step up their localization efforts.  It wouldn’t take long to receive an answer as they partnered with Electronic Arts, the borg of game publishers during that period.  Parasite Eve would be the first release in their combined efforts.

Parasite Eve was released in the fall of 1998 for the US.  Its origins date back to a novel written by Hideaki Sena with the game serving as a sequel to the events in that story.  It’s Christmas Eve and Aya Brea is attending an opera at the behest of an unnamed date.  During the performance the crowd spontaneously combusts with the exception of Aya and main actress Melissa.  After confronting her Aya’s mitochondria begin to evolve but not before Melissa, now referring to herself as Eve, escapes.

The events of the story occur over the course of 6 days with each day usually covering one main location.  Gameplay is a mix between Resident Evil and Final Fantasy, pulling elements from those two series while offering its own original ideas.  Exploration is done across prerendered backgrounds as you search for items needed to progress.  There are some light puzzle solving elements but nothing that will rack your brain.  As you walk around you will inevitably stumble into turn based battles and it’s here the game becomes its own beast.

I love the battle system in this game.  In my opinion its almost up there with Grandia.

The Active Time Battle system from Final Fantasy is lifted wholesale with many improvements.  All battles take place within your exact locale and within a limited space.  You have free range of movement as you dodge attacks and wait for the active time bar to charge in order to perform one of 3 options; attack, use an item, or a mitochondria spell.  At any given time you can bring up a wire frame that represents your attack range.  Enemies outside of your range will cause you to miss or inflict significantly less damage.  The enemy attacks are also subject to these rules although you can’t see their radius.   Depending on the location of a random battle its possible to fight in a restricted corridor with no room to maneuver or conversely in wide open spaces that can benefit you or the enemy.  Using a combination of your parasite energy and knowledge of an enemy’s attack range it’s possible to walk away from any battle unscathed if you’re good enough.   It’s the wealth of options that make the fights actively engaging.

Affecting all of this are your weapons and armor.  Weapon types are broken down into handguns, machine guns, grenade launchers, and melee.  All of these differ in terms of range, bullet capacity, and frequency of attack and some have added effects such as rate of fire, increasing your item capacity, etc.  You don’t need to become attached to one weapon type as the tool system allows you to customize your equipment to a ridiculous degree.  Using a tool allows you to apply any extra stats or one added effect from a piece of equipment to another at the cost of the item.   Super tools allow you to keep the items after this is done though those are rare.

The wealth of added effects allows you to craft truly unique pieces of equipment such as armor that will automatically heal you when low on hp or the ability to attack 14 times in a row (Don’t do this, I learned the hard way).  If you were so inclined you could keep your initial starting gun and simply upgrade it for the rest of the game not that I recommend it.  Or have a handgun with the range of a grenade launcher that also shoots bullets like a machine gun.  The choice is yours.  Tailoring your equipment to match your play style reminds me of the materia system in Final Fantasy 7; more than likely inspiration was drawn from that game.

Ridiculously pretty FMV, too bad there’s a disproportionate amount of it.

If there is any one flaw it’s that the game is a bit short and herds you to the next plot point with very little room to go off on your own until Day 5.   Although the game is 2 discs the majority of that is taken up by FMV that while pretty to look at is a bit excessive.  Weapons and armor are thrown around at a silly pace with most of them being junk barely worth salvaging for extra stats.  Because of the length you won’t really get the chance to delve too deeply into the numerous systems available although this is alleviated by the optional Chrysler Building once you finish the game.  Even so it’s a tad disappointing that there are numerous elements mentioned or alluded to (such as the rare trading cards & super tools) that aren’t fully explored unless you do the bonus content.

In a roundabout way Parasite Eve offers something for both Resident Evil and traditional RPG fans.  It straddles the line between both games while offering its own unique ideas.  If you play the main game plus the optional EX game there is a wealth of content to run through, proving many hours of entertainment.