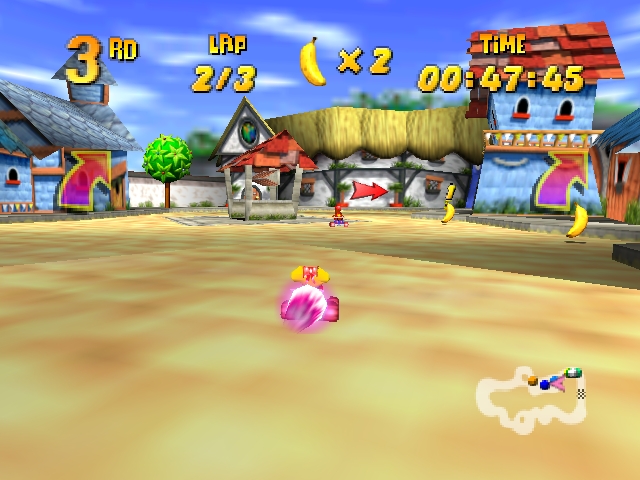 During the 32-bit era no exclusive developer was more important to their partner than Rare was to Nintendo.  You could argue Squaresoft filled that role for Sony but the truth is even without them there were a ton of other third parties that would have picked up the slack.  Whenever Nintendo would delay a game or had a hole in their lineup Rare was there to cover their ass.  In 1997 when both Banjo Kazooie and Conker’s Quest were delayed it could have been a disastrous holiday for Nintendo if Rare were not prepared with Diddy Kong Racing.

Diddy Kong Racing was released in the fall of 1997 completely out of nowhere.  No one was even aware of its existence until 2 months prior to release.  Released to fill the hole left by Banjo and Conker’s delay that the game was so good despite no prior coverage was a shock to many.  Although Mario Kart 64 had already seen release earlier in the year Diddy Kong Racing was different enough that the two games could co-exist.  Despite genre similarities, both games excelled in separate categories.

You have your choice of 8 characters to go through the game, each with their own stats in terms of speed, acceleration, and cornering.  Unfortunately you are not privy to this information anywhere in the game.  The stat differences actually do have a tangible impact and give you a reason to use the characters that are fast but have terrible handling and acceleration.  Nearly all courses allow you to race in the stock car, hovercraft or plane.  Bananas scattered around the tracks increase your top speed and all weapons can be upgraded 3 times.  It wears its Mario Kart roots on its sleeve but what it copies it then improves upon.  And best of all none of that rubberband AI bullshit from Mario Kart 64.  Thank the lord.

The game is split into two parts, adventure and multiplayer.  In the adventure mode you are assisted by Taj the Genie as you visit 4 separate hubs to find the pieces of the Wizpig amulet.  Once assembled you will then have the right to challenge Wizpig to a race.  The adventure in the title is no misnomer as there is a wealth of content.  20 courses total, 10  boss battles, 4 multiplayer challenges, Time Trial races, and the silver coin challenge is a lot of content to work through, something very uncommon for games in this genre.

By completing all 4 races in a world you are allowed to challenge that world’s boss, who in turn will give you the silver coin challenge.  The silver coin challenge is a grueling race to collect 8 silver coins on each level and still place first.  Beating the boss a second time nets you a piece of the Wizpig Amulet.  Rare had started to develop a reputation for collectathon bullshit and this game could be seen as the start of that.  To the game’s credit the majority of this stuff is completely optional.

You wouldn’t expect it as Kart racers are usually aimed at younger audiences but there is a decent amount of challenge in the game.  The bosses are cheating bastards that require you to run a near perfect race in order to win.  Your choice of character for these will largely determine whether these battles are near impossible or a piece of cake.  The silver coin challenge will force you to become intimately familiar with the tracks as many of the coins are placed in such a way that you’ll have to go out of your way to reach them.  I love that they don’t hold your hand through these as it is impossible to scrub your way through them, a bit rough considering the target audience but a necessary step in building their skills.

Multiplayer surprisingly is a bit weak.  The standard 4 player races are available for all of the tracks unlocked.  The battle mode is where it comes up short.  On 1 level of each world there is a key that will unlock a multiplayer challenge, completion of which unlocks it for the multiplayer mode.  2 of these are battle royales and the others are objective based, an attempt to inject a bit more life into multiplayer.  Regardless the level designs just don’t hold up and are boring, an area Mario Kart got right. These stages are far too spacious, leaving you alone with no sight of your opponents for long stretches at a time.  It’s a bit of a shame but the Adventure more than compensates.

Rare were one of the few developers able to overcome the N64’s patented blurry look and this game is a showcase for the hardware.  The overall look of the game is very vibrant with some sweet specular highlighting and transparencies.  The overall look of the game is super clean due to smart art direction and technical know how.  The only hitch would be the at times sub par frame rate and saccharine character design.   The music is also wonderful, able to change dynamically on the fly with a diverse array of themes that are also a bit cutesy at times.

After the slight disappointment of Mario Kart 64 this was a breath of fresh air.  Play this for the single player mode and Mario kart for the multiplayer.  This is one of the few times where a clone is able to legitimately one up its inspiration in many facets and turn out to be a better game overall.