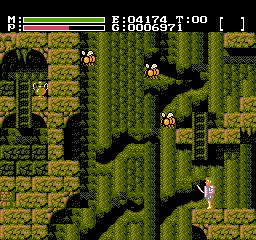 I don’t know when my obsession with playing Faxanadu began.  Hell I don’t even remember why.  If I remember correctly I think I first came across it in the back of the instruction manual for another game.  All it had was the box art and the cover blurb about daggers, wing boots and monsters with a picture that I would later find out was the World Tree in the game.  It seems minor but it was enough to send my 10 year old mind to work imagining how awesome the game was.

Faxanadu was released in 1989 and is a spinoff of the Xanadu series, itself a part of the long running Dragon Slayer series of which we’ve received very few installments in America.  You play as an unnamed adventurer who has returned home after an undisclosed period of time to find his hometown in ruins and monsters everywhere.  You are tasked by the King to rid the land of evil and are given $1500 and sent on your way.  You know what?  That’s some bullshit.  $1500 gold?  Really?  It’s bad enough that as soon as you get home you’re sent to more or less bring about world peace but this mofo can’t even tell the shopkeepers to help out and give you a freebie?

The game is pretty much a side scrolling action RPG as you move from screen to screen killing monsters and collecting items to progress.  Unlike most other action RPGs, you traverse the lands like a platform game having to make timed jumps, climbing ladders and such.  Most enemies will drop gold or food to restore health.  You gain experience for killing monsters but despite what you think these have a different purpose.  Rather than leveling up experience is used to receive new ranks from “gurus” (heh) in the churches who also give you passwords to record progress.

Your rank determines how much gold and experience you start with whenever you resume the game.  The spells you can buy to be frank aren’t really necessary.  They take varying amounts of MP to use and start to get expensive to buy.  Funny note, you can buy one of the end level spells early in the game but you’ll have to grind for close to an hour, not that I recommend it.  If you pay attention to enemy behavior you can kill all of them with your sword without ever being hit.

As you progress you’ll enter many dungeons in the game and it’s here where the game takes on a Zeldaish tone.  You’ll collect many different keys named after playing cards to advance and collect new items, weapons, and armor.  The dungeons are capped off by bosses that can be very tricky to beat and inflict large amounts of damage.  I find the placement of some of the bosses highly dubious; there are multiple rooms where the boss is directly in your face upon entrance, an unfair situation.  There are a large amount of sub items you can use even though most of them have a set duration.  The platforming in these parts can be tricky since you gain momentum as you walk and move faster.  Sometimes you need to make very precise jumps and if missed can lead to excessive backtracking.  There are plenty of narrow ledges that you’ll have to reach the very edge of in order to successfully clear gaps.

The game is broken up into 3 distinct sections as you advance through the World Tree.  The roots of the world tree where you begin, the trunk obscured in mist representing your ascent to the top, and the upper reaches in the tree’s branches.  Going back and playing it it’s astounding that the graphical “theme” of traversing the world tree was completely lost on me.  Another nice touch, all armor is visible once equipped.  The creature design is…..weird.  Although the game calls them dwarves and elves I can guarantee that description is the furthest thing on your mind once you see them.

Despite all of this the visual variety in the game is pretty low: the majority of the game is overly brown, green, and red in tone.   What’s there is good; you’ll just tire of it after awhile.  The soundtrack is completely awesome and is suitably haunting in tone and upbeat when it needs to be.

Overall Faxanadu isn’t too hard and is still an enjoyable romp.  Life restoring items are dropped by enemies frequently and you’ll also find plenty of red potions scattered about.  If you forego buying magic you’ll always have enough money for new weapons and armor.  The game is non linear to an extent in that you can skip a lot of the dungeons and won’t suffer as a result.  As a matter of fact if you know what you are doing you can beat the game in exactly 6 or 7 minutes.  Those that love sequence breaking can give this a try.  Action RPGs weren’t too plentiful on the NES but even so this game is definitely worth your time.