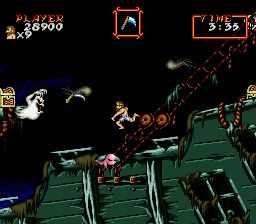 I have a love and hate relationship with the Ghouls and Ghosts series.  When the games are good they are phenomenal.  When they’re bad they are some of the most god awful terrible games known to man.  The NES port of the arcade game is one of the most frustrating games created and should be avoided like the plague.  However, Ghouls n Ghosts despite being hard as hell is still an incredible game.  Capcom would perfect the formula with this gem right here.

Released not too long after the Super Nintendo launched in 1991, the game starts with the Princess being kidnapped right in front of Arthur’s face.    That’s pretty harsh man.  8 levels broken down into 2 sections each await, capped off by monstrous bosses that do the series proud.   Series veterans can jump right in but have some new additions to look forward to, adding a new flavor to the gameplay.

Although the game starts off in the traditional graveyard it is anything but standard.  Armor can now be upgraded 3 times:  bronze armor makes your currently equipped weapon far more powerful and imbued with magic.  The change is actually pretty startling; some weapons that were previously terrible are absolutely godlike when enhanced.  Gold armor comes with a shield that can block one projectile but more importantly allows you to charge your weapon and wreak havoc.  Theoretically you can spam charge attacks all day like a retard that just learned how to throw his first fireball in Street Fighter but it’s better to time it properly and take advantage of the temporary invincibilty for the duration of the attack.  The last upgrade is a lot rarer, a new shield which can block 3 attacks but only while you are standing still.

A much larger selection of weapons are available this time with each varying in terms of strength, speed, and range.  For my money the dagger is the best with its magic attack being godly, followed by the crossbow which turns into a homing attack that only suffers in power.  The biggest addition is the double jump.  Not only does it add extra height to your jumps (obviously) but it also allows you to change direction in midair.  The levels have been crafted with the double jump taken into account and it functions as a useful oh shit button.  Admittedly it does look a bit stupid to see a knight in full armor performing a double jump but you will thank god for it as the series trademark difficulty is here to kick your ass.

The series is known for kicking asses and taking names and this game is no different.  Enemies spawn infinitely and the level hazards are greater in number.  There are many enemies that require more than 1 hit to kill and their placement is downright devious.  Depending on your luck when it comes to RNG, you might find yourself stuck with a terrible weapon for the duration of an entire stage.  Because you can double jump there are far more areas that force you to make blind leaps of faith.  All of those complaints take a backseat to the biggest issue with all the games in the series: you have to play through the entire game twice, the second time to find the Goddess Bracelet the princess dropped.  I hate that the game has no batter backup or passwords to save progress; this is not a short game.

In spite of all that the game is extremely fair in terms of the challenge presented.  Because the levels are split into 2 parts it isn’t very long before you’ll reach a checkpoint.  Although you can only survive 2 hits before death the hit detection is far more lenient.  Also if you lose your armor a chest with a replacement is usually not too far off.  The game is not designed for you to run through every stage like Contra; as long as you keep that in mind and go at a slow pace it’s entirely manageable.   There is certainly an element of trial and error to every stage so if that form of gameplay is not your cup of tea you might be better off elsewhere.

As a near launch game Capcom saw fit to use nearly every special effect in the then still new SNES arsenal.   Use of Mode 7 is kept to a minimum thankfully, and instead they use slight scaling and a lot of rotational effects throughout your journey.  The backgrounds are gorgeous and the stages show a lot of variety even within the same level.  It all comes at a price as the game suffers from some pretty terrible slowdown in parts.  This was a common problem in the early days of the SNES but at least here you can actually benefit from it in spots.  I love the soundtrack and feel it’s the best in the series.  This was an early showcase for the Super Nintendo and still holds up today.

This still remains the best in the series, especially the Gameboy Advance version that has more stages and most importantly 2 save slots.  I would steer you to that version if you want to play this game but either way you can’t go wrong.