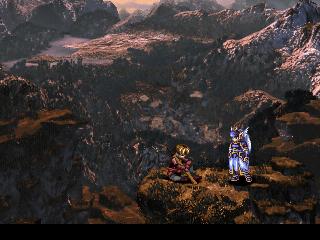 It isn’t everyday that a game comes along and completely shatters your perceptions of what an RPG can and should be.  RPGs by nature have very set mechanics and story structure and while there have been a few that innovate by attempting something different for the most part the majority are comfortable sticking to the basics.  Valkyrie Profile, from its story to its battle mechanics is completely original and was a much needed breath of fresh air in a stale genre.

Valkyrie Profile was released in 1999 by Enix of America, one of their few releases before closing up shop for a second time in the US.  You play as Lenneth Valkyrie, tasked with recruiting and preparing the souls of departed warriors before sending them to Valhalla for the battle of Ragnarok.  Although the game largely hinders on the impending battle between the Vanir and Aesir, as Lenneth you will uncover many clues to your former identity alongside the many warriors that fight by your side.  Valkyrie Profile is an interesting combination of turn based combat and action RPG mechanics as you explore the many dungeons and caves, with each facet of gameplay given equal attention.

Drawing heavily from Norse mythology, Valkyrie Profile takes place as the Aesir and Vanir are on the verge of war.  Lenneth is awakened by Odin to supply the Vanir with new warriors to assist in the war and sent to Midgard.  The world is divided into many provinces, each with their own conflicts and issues, and these are where the soldiers you’ll recruit come from.  Although war is imminent, not everything is as it seems in Valhalla, with mistrust and deceit to spare.  Discovering the clues to Lenneth’s past life will set the story down 2 different paths and influence the course of the war.  Many of the most important figures of Norse myth make an appearance, such as Odin, Freya, Thor, and even the world tree Yggdrasil.  The setting and characters have been cribbed and incorporated into other series before but never has an RPG focused exclusively on it, further distinguishing it from its contemporaries.

The story is as epic as it can get; this is Ragnarok!  They don’t get any bigger than that.  As you would expect when dealing with subject matter such as this, the game is rife with many adult themes, such as suicide, betrayal, sacrifice, and even slavery.  Make no mistake, the game does not pull any punches when dealing with its subject matter; for anyone tired of the typical Japanese RPG clichés this is the game for you.  The source of all of these mature themes?  The characters.

In total there are 24 characters you can recruit overall.  All of these are preceded by an elaborate cut scene revealing the circumstances leading to their deaths.  Now that I think about it that is really morbid.  You have to watch your future party members die.  More than just a creative time waster these death scenes serve as character development as well as clues to locating powerful equipment for them if you revisit locations important to them.   Every einherjar recruited to your side can be used in the random battles and possesses unique abilities to assist in combat.  The purposes of training einherjar are to fulfill the requests for warriors between chapters, often leading to some hard decisions if you’ve become attached to a particular warrior.  They’re not fooling anyone though, there are many who were created specifically to be sent up because they’re either really terrible or meet the requirements a little too perfectly.

Depending on the difficulty you will not meet certain characters, with some of the absolute best reserved for hard difficulty or the optional Seraphic Gate.  Training involves more than just leveling up; everyone possesses inherit hero value, which starts as negative upon recruitment, as well as good and bad traits.  Your job is to eliminate their bad traits while enhancing the good to raise their hero value to an acceptable level and also teaching the appropriate skills to be sent to Valhalla using the points received from battle.  It does not pay to be stingy with who you send as it will have a direct effect on the resources available to you in the following chapters.  There are only 3 that cannot be sent for story reasons and unfortunately to receive the best ending you must send up one of the best characters in the game (I won’t spoil who).

The game is divided into 8 chapters, further split into differing periods depending on the difficulty (16 on easy, 24 normal and 28 hard).  By focusing, Lenneth can hear the cries of the dead, revealing the location of an einherjar about to die or discover the location of a dungeon.  Every action taken uses a certain number of periods with a chapter complete once you’ve used up all periods.  Usually near the end of a chapter you will have free periods to spend as you like, more than likely to further level up your warriors.  Once a chapter is over, the Sacred Phase begins, where you are graded on a number of factors: the quality of einherjar sent, whether you stole artifacts that belong to Odin, and informed of the type of warriors needed in Valhalla.  It is possible to screw up by wasting periods doing nothing and even sending lousy characters to Valhalla that do not meet Odin’s approval.  If your approval rating drops too low, Odin will kill you for doing such a terrible job and the game ends.

Dungeon exploring has much in common with action RPGs.  Lenneth jumps, slides, and climbs with the best of them and has the ability to shoot crystals that serve multiple purposes.  These crystals will either freeze enemies in place to avoid combat or use as stepping stones as well as create platforms.  These crystals can be stacked to reach greater heights or press switches.  Attacking an enemy prior to combat will grant you the first strike, while the opposite holds true.   The layouts of the dungeons have many hidden chests to find and help spruce up what could have become boring in time.  You might think the maps would be simple because of the perspective but that isn’t the case; by Chapter 4 they are gargantuan and easy to become lost in.  The artifacts found after defeating bosses can either be sent to Odin or kept at the expense of your evaluation rating.

It goes without saying that doing your absolute best will grant you the most rewards.  There are no shops, all items and armor are either found or created using materialize points.  The better the grade you receive during the Sacred Phase the more materialize points you are given, you will gain access to even greater items to create, and even some of the sacred items that “rightfully” belong to Odin will be given back to you.  All of the systems in the game are very synergistic, rewarding you for diligence and punishing greed.  There are a veritable ton of secrets in the game, many requiring you to at times go against what the game tells you but still within reason.  The higher difficulty levels are absolutely worth playing since they increase the total einherjar that can be recruited and also the number of dungeons.  Regardless of the difficulty the game can be brutally difficult, even on normal, with complete mastery of the battle system a must.

Valkyrie Profile features a unique battle system.  Combat is turn based, with each character in your party controlled by a button on the controller.  You can send everyone to attack simultaneously if you so choose but that is ill advised.  Depending on the weapon equipped, any given character can attack up to 3 times with speed and frequency also governed by the weapon.  Mages attack using spells governed by charge time, with the more powerful spells increasing the length you’ll have to wait.   Stringing combos together will produce a variety of effects: magic crystals can be produced to reduce charge time, gems will increase experience, an enemy’s guard will be broken but most importantly the Hit Gauge will increase.  Filling the gauge to 100 will allow the use of a special attack called, “Purify Weird Soul”, a devastating attack that is crucial to defeating the harder enemies and bosses.

On the surface it seems simple enough, but there is considerable depth to be found.  Lining up your attacks in sequence depending on your party is vital to maxing out the hit gauge, and also deciding who will push it to 100%.  After a special attack the gauge will drop by 40%; if you can fill it during another special attack it’s possible to perform 4 purify weird souls in a row.  Performing the right attacks will yield large volumes of magic crystals, enabling your mages to use their powerful spells sooner.  Although the enemies cannot combine attacks, many times the more powerful demons will block you from attacking their own mages in the back.  Switching attack order in order to circumvent an enemies defense, such as leading in low to force a low guard then following up with a high attack are some of the tactics you will develop.  Judging the makeup of your party and ascertaining the best course to achieve the necessary results will carry you a long way, and the game provides ample opportunity to test your skills in the later dungeons and the Seraphic Gate if you so choose.

To say that Valkyrie Profile is beautiful is an understatement.  There are very few 2d games of this caliber on any console short of Vanillaware’s offerings.  Even the lowliest sprite is animated in exquisite detail and the enemies exhibit the same level of insane degree of polish.  The environments feature a ton of parallax scrolling and are very picturesque.  Special mention has to go the art and character designs, with a ton of character portraits for nearly every character you meet.  The only 3d in the game is the overworld map which looks good by PS One standards, but you’ll spend very little time on it.  Composer Motoi Sakuraba had not worn out his welcome in 1999 and this remains one of his best soundtracks, with a suitable array of haunting themes and sentimental pieces to match many of the darker character deaths.  The voice acting is competent for the most part with very few reaching the level of ear grating and even then you’ll only hear them briefly.  In all facets this is the complete package.

It’s not very often that an RPG of this caliber comes along that is truly unique.  Enix took a big risk releasing this in the US and while it did not sell as well as it should have that doesn’t change the fact that Valkyrie Profile is probably one of the top 10 RPGs released for the Playstation, no small feat considering the hundreds released locally and abroad.  The original Playstation release is hard to find and probably fetches a high price, however an enhanced port was released for the PSP under the name Valkyrie Profile Lenneth.  If you can stomach slightly longer load times you get the same gameplay with additional cut scenes and an even better localization.  Either way this is not to be missed.