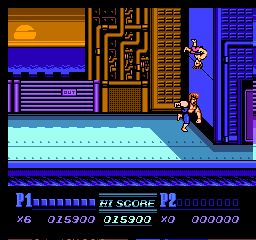 It was pretty common during the NES era for ports of arcade games to differ drastically from the source material due to the hardware’s constraints.  It wasn’t very often though that the home game was superior to the arcade but in the case of Double Dragon 2 it is very true.  In the arcade Double Dragon 2 was an all too brief affair.   For the home market it was expanded and given the length necessary to make experience whole.

Double Dragon was released in December 1989 in Japan with Acclaim releasing the US version the following month.  Following the same story as the arcade, Marion has been killed by the leader of the Shadow Warriors and brothers Billy & Jimmy Lee are on a mission of revenge.  The NES version actually has cut scenes that further the plot between levels and although brief are a welcome addition.  The 2 player coop missing from the first home port has been included this time, fixing one of Double Dragon’s biggest flaws.  That is just the tip of the iceberg in terms of enhancements over the arcade game.

Rather than the simple punch and kick buttons of the first game they are now directional which can be a bit confusing.  The arsenal of moves has been expanded considerably with all available from the start rather than the experience system the first game employed.  The only frustrating aspect of this would be the difficulty in pulling off the most devastating moves, such as the flying knee, uppercut, or hurricane kick but considering the damage they do its understandable.  What elevates this over the arcade would be the length: whereas the arcade game only had 4 stages, the home port has 9 altogether.

The stages are separated by difficulty, with all 9 only available on Supreme Master.  The levels shared with the arcade game are longer  and have new layouts.  The new stages take you on a roller coaster of set pieces, with some stages featuring environmental objects you can use to your advantage.  Mission 3 takes place on a helicopter, with the door opening every 20-30 seconds, giving you an opportunity to knock enemies out in one shot, including the boss.  Mission 4 is in an underwater base with a spiked ceiling that you can throw enemies into if you’re proficient at uppercutting.  You remain susceptible to all of these as well, making it equal parts risk and reward.

While most of the levels are excellent, some of the later stages highlight the game’s biggest weakness: the introduction of platforming.  Clearly this game wasn’t designed with it in mind and it shows.  The jumping controls are imprecise and the collision detection is spotty; sometimes you’ll clearly land on a platform but instead will fall through.  These sections are completely unfair and can drain all of your lives in a heartbeat.  It’s completely ridiculous that you can play the game perfectly then reach Mission 6 and all of that progress will mean nothing as you die repeatedly.  Oh yeah, the game’s biggest flaw: no continues, no passwords, no battery backup.  Unless you exploit the 2-player trick* you ain’t seeing the end of the game.  Which is a shame, as the ending is absolutely worth the struggle.

In some ways this is the love it or hate it game in the Double Dragon franchise.  The few problems the game has are pretty severe but I would argue the quality of the rest of the game makes up for it.  This is one of the best beat em ups on the NES, too bad it was followed up by Double Dragon 3.  Man fuck that game.