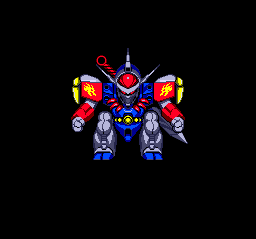 New console launches are always full of promise.  New technology!  New ideas!  We look to new hardware to see what years of new technology can do to wow us and give us that feeling of being a kid all over again.  Super Mario Brothers revolutionized the industry, Super Mario 64 did the same once again, Halo finally did first person shooters justice on console, etc.  But not all launch games are created equal.   For every Super Mario Brothers we end up with an Altered Beast or this turd: Keith Courage.

Keith Courage in Alpha Zones was the pack in game for the PC Engine and Turbo Grafx-16 for their respective regions.  The Japanese version is based on the anime series Mashin Eiyūden Wataru, however the anime was not released in the US so all references to it were stripped for the games American release.  Instead we get this gem of a story:  You are Keith Courage, a member of N.I.C.E (Nations of International Citizens for Earth) and your mission is to defeat B.A.D (Beastly Alien Dudes) and bring world peace.  Good god they didn’t even try.  Not that it would have made much of a difference; Keith Courage suffers from repetition and general mediocrity and would have needed much more than a compelling story to save it.

An action platformer, Keith Courage is divided into two parts, the Overworld and the Underworld.  On the Overworld you control Keith as he speaks to villagers and destroys minor enemies for money that can be spent to refill your life bar, buy bolt bombs, and a new sword, the latter two of which are used in the Underworld.  At the end of each Zone Keith dons the Nova Suit and descends to the Underworld.  Here the action ramps up with stronger enemies and more instant kill spikes, ending with a boss battle.  This could have made for a decent overall game but the bare minimum work was put into the game and as such it has issues.

The largest problem is the repetition.  Not so much the game structure, the whole game overall.  Every Zone, both overworld and underworld looks exactly the same with minor color palette changes.  The same criticism could be lobbied at some of the Mario games however those switch up the tile sets that make up the levels and no two levels look the same.  This extends to the lack of enemies as well, with at most maybe 10 overall in the entire game.  Be prepared to fight the same 3 enemies in every level.

The game is ridiculously easy, to the point where unless you fall in a pit of spikes you might never die.  You can take as many as 10 hits before losing a single heart with the exception being the bosses.  But even they pose little threat.  When we bought a Turbo Grafx in 1990 I finished the game in less than two hours.  Definitely not a good start for a new system.  The lack of challenge and repetition equals boredom very quickly.

It tries hard to be a classic but falls short.  They would have been better served packing in Bonk’s Adventure, now that is a retro game I can get behind!

Not every console can launch with a game on the level of Super Mario Brothers but you can do a lot better than this.  Keith Courage was not a good game then and it isn’t a good game now.  Packing the game in with the system was the best move they could make otherwise I have a hard time believing anyone would have bought this of their own volition.  Leave this one in the history books.