Back to the Future NES

Back to the Future NES Game Cartridge
Back to the Future was released for the NES in 1989. It was developed by Beam Software and published by LJN. The game had one sequel, putting both parts II and III together called Back to the Future Part II &amp; III. The story is about Marty McFly who mistakenly is sent back 30 years in the past and accidentally disrupts his parents meeting each other. Marty is now faced with the the chance of extinction because of the temporal paradox. He will need to somehow reunite his parents to be able to get back to his original time.
The player will take control of Marty McFly and go through stages that are set in the year 1955. He will collect clock icons through the levels to be able to progress onto the next stage and eventually avoid his future from vanishing. This will be indicated with a photograph that is fading at the screen’s bottom. If it fades completely, the player loses a life when it shows him vanishing. When the player collects 100 clocks, it will restore the picture back to fully unfaded. There are two power ups that can improve Marty progressing. The first one are bowling balls which destroy enemies. The second is a skateboard that will speed up the gameplay. Three different mini games are in each stage’s end that feature Marty repelling the gang of bullies, including biff Tannen, from the cafe, blocking kisses Loraine will send Marty in shapes of hearts, and positioning Marty’s guitar properly so he can stay in tune during the dance so George can kiss Loraine. Gameplay on those stages are compared to Paperboy often.
In the last stage, the player will get to use the time machine DeLorean during the night on the streets while trying to dodge obstacles and lightning bolts while also trying to accelerate to 88 mph right at the stage’s end, bringing Marty back to 1985. There are only two songs in the game from the movie. The first is a faster version of the song The Power of Love that will play through the majority of gameplay. The second song, Johnny B. Goode, plays in the level when Marty is playing a guitar. If the player loses all their lives, the game over that shows up will say that Marty is stuck there. The player will also see that message if they fail to have the Delorean reach 88 mph when they reach the wires, no matter how many extra lives the player has left.
UPC: 0-23582-05167-3
Platform: NES
Players: 1
Condition: Used
Genre: Action and Adventure
Region: NTSC (North America)
Rating: Everyone 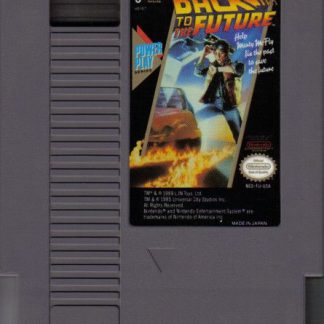