Breakthru NES Game Cartridge
BreakThru was released for the NES in 1987. It was originally released for the arcade in 1986. The PK430 plane, which is a secret fighter, was stolen from the player’s country. The player will drive in a buggy that is equipped with a weapon and will need to traverse five areas, or enemy strongholds. The five levels are the Mountain, the Bridge, the Prairie, the City, and the level Recover the Aircraft. Obstacles will be encountered while playing through the levels like helicopters, armored vehicles, trucks, tanks, flamethrowers, jeeps, soldiers, rocks, and land mines. There is a power up that will give the player a three shot cannon temporarily, and extra lives can also be found. When the last level is completed, the ending sequence will be shown and the player will continue the game, being able to select a level to begin at. The last winning condition is when the player completes the last level twice, regardless of what level was started first. The game will end when the player accomplishes this.
UPC: 0-13252-00208-1
Platform: NES
Players: 1
Condition: Used
Genre: Racing
Region: NTSC (North America)
Rating: Everyone 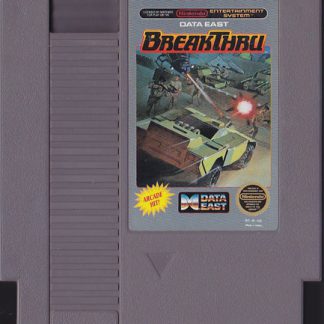