Gumshoe NES Game Cartridge
Gumshoe was released for the NES in 1986 in North America and Nintendo developed and published the game. The game is played with the Zapper gun controller. The character Mr. Stevenson was an ex agent for the FBI and turned into a detective. He received a note from King Dom, the Mafia boss, saying he has kidnapped his daughter and wants a ransom. Stevenson must then collect a total of 5 "Black Panther Diamonds" in 24 hours so he is able to get his daughter back. To play the game, Mr Stevenson will walk continuously right and the player will need to shoot him with the Zapper to make him jump. Enemies on the screen will need to be shot with the Zapper to kill them. It does not subtract ammo when the player shoots Mr Stevenson to jump. Shooting an obstacle or empty area will subtract a bullet. Red balloon that you can have Mr. Stevenson grab will add ammo.
UPC: 4-73109-75621-3
Platform: NES
Players: 1
Condition: Used
Genre: Shooter
Region: NTSC (North America)
Rating: Everyone 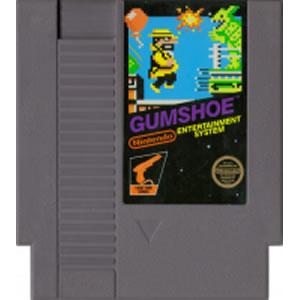