Jurassic Park NES Game Cartridge
Jurassic Park was released for the NES in 1993 and is based on the novel and film. Ocean Software published and developed the game. Nintendo Power has praised the game for its graphics and open world, including most of the creatures in the game. Like the novel and film, Dr. Alan Grant has become trapped inside Jurassic Park that is on the island Isla Nublar. The power to the park has gone out because the computer had a major malfunction and now the dinosaurs are free and roaming around the park. Grant will need to complete multiple missions so he can escape the island and not be killed by dinosaurs. Tim and Lex will also need to be rescued who are the grandchildren of John Hammond, the owner of th park.
The view and gameplay is top-down shooting. The player takes control of Alan Grant and will need to finish six levels that have objectives that range from finding and rescuing John Hammond’s grandchildren, destroying nests of Velociraptors, getting the power working again, etc. Every level has a certain amount of stages with the amount varying to where you will need to find a specific amount of access cards and dinosaur eggs to progress further in the level. The types of dinosaurs the player will face include Velociraptors, Compsognathus, and Dilophosaurus. The end boss of some levels is the Tyrannosaurus Rex. Dinosaurs like T. Rex will need to be avoided since the player cannot kill it. The dinosaurs that are common can die from the guns your character shoots, which the player can find scattered in the levels.
The game also has mystery boxes placed throughout the levels that have effects to help the player. Some boxes give a player extra health, a life, or temporary invincibility. Some boxes might take a life away or have the energy of the player lowered. The player will start with three lives and have four continues. The final level in the game will have the player walk around a smaller stage that has the developers names. The exit will end the entire game.
UPC: 0-20295-01009-6
Platform: NES
Players: 1
Condition: Used
Genre: Action and Adventure
Region: NTSC (North America)
Rating: Everyone 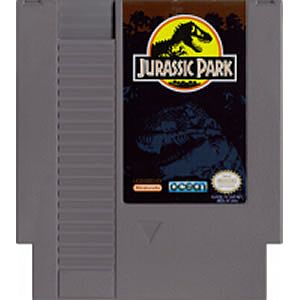