Astyanax NES Game Cartridge
Astyanax, also known as The Lord of King in Japan, was released for the NES in 1990. It was originally an arcade game with the same name that was released in 1989. It was developed by Aicom and published by Jaleco.
The main protagonist in the game is Astyanax, a 16 year old teenager attending Greenview High School. He has been having a repeating dream about a young woman calling out his name. While going to class one day, he gets transported to another dimension. He then meets Cutie, who is a fairy, and tells him he has been summoned to Remlia to rescue Princess Rosebud, the ruler of the kingdom. She has been kidnapped by Blackhorn, an evil wizard. Astyanax is given Bash, the legendary ax, and goes on a search mission to the lair of Blackhorn to save Rosebud.
This version, unlike the arcade, is only one player. You have a life meter, a strength meter that will fill by itself when you are not attacking, and a magic meter for spells. You can also wield other weapons than the ax, and different spells can be used than the arcade version. When the player finds a power up, your ax will turn into a spear, and the spear can be changed to a sword with another power up. The spear is the weakest weapon but gives Astyanax the ability to cast spells more by using less of the magic meter. The sword is the strongest weapon, but uses more of the magic meter when casting spells. You will go back to using the ax when you lose a life.
The magic spells available to use are a spell to freeze all the enemies momentarily, a blast of fire that will hurt all the enemies in the range of the blast, and a spell that will cast a thunderbolt that will damage all the on screen enemies. The freeze spell costs the least magic, while the thunderbolt costs the most. There are also power ups that increase your power meter, which will allow stronger ax attacks, wings that will increase the speed of refilling your power meter, and potions that will restore your magic and health. There are also extra lives available to find. Cutie will appear in certain levels, offering Astyanax to recharge his magic or change his weapon.
UPC: 0-32264-90011-6
Platform: NES
Players: 1
Condition: Used
Genre: Platformer
Region: NTSC (North America)
Rating: Everyone 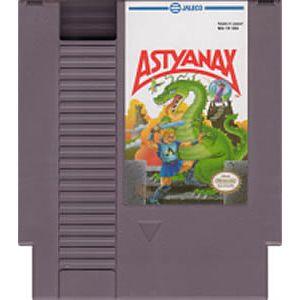