Marble Madness NES Game Cartridge
Marble Madness was released for the NES in 1989. The game was Atari’s first to use the hardware Atari System 1 and was also the first to use the C programming language. Another first was the game using a true stereo sound. Past games used a simulated stereo or monaural sound. Mark Cerny, the games designer, drew his inspiration from racing games, miniature golf, and artwork from M.C. Escher. Cerny applied the minimalist approach to design the game’s appearance of enemies and courses. Marble Madness was very successful, with the game being ported to many platforms, also inspiring development of future games. The sequel was in development and was in the plans to release sometime in 1991, but had to be canceled when testing results showed that it did not have competing capabilities the other titles had that were being released.
Marble Madness has an isometric style for platforming, having the player move a marble around from the third person view. The marble is controlled with the NES controller with the D-Pad. The game’s goal is to complete six courses that are maze like and isometric, before the time runs out. Any time that is left from the timer when a level is complete, not including the first stage, the next stage will have that time carried over on top of the set amount of time given for that next stage. The game can be played with two players that can compete with each other. Extra time and bonus points will be awarded to the winning player. Both players will have a separate timer. While progressing through the game, the courses will become more difficult and will have more obstacles and enemies. Every course has unique visual themes. The first course, called Practice, is simple and shorter than other courses. The fifth course, called Silly, has a polka dot design and the orientation is in the opposite direction of other courses.
UPC: 0-32244-04880-7
Platform: NES
Players: 1-2
Condition: Used
Genre: Platformer
Region: NTSC (North America)
Rating: Everyone 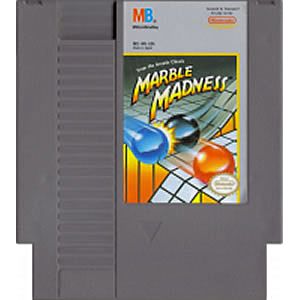