Galaga NES Game Cartridge
Galaga, originally released as an arcade game in 1981 and the Galaxian sequel form 1979, was released for the NES in 1988 in North America. Namco developed the game and Midway published it. It was an extremely successful game during the arcade golden age. The game has been ported and re-released for many consoles over the years and has also had many sequels. There is a glitch in the game to cause the enemies to cease fire at you because of an error in the coding. Similar to Pac-Man’s split screen glitch, another glitch in Galaga allows the player to roll over from level 255 to level 0. This can stall the game depending on difficulty.
The goal of the game is trying to get the highest score the player can by shooting insect looking enemies. The player takes control of a spaceship that moves right and left across the bottom part of the screen. The enemies will swarm into the screen in formations from the top part of the screen and then will begin to fly down at the player while firing bullets and trying to ram into you. The later stages will have enemies breaking form from the group entering to frantically try and run into you. The game will be over after the player loses all their lives, which happens when colliding with enemies, being shot, or getting captured.
Galaga introduced newer features from the first game, Galaxian. These new features are being able to shoot twice back to back rather than only having one shot going across the screen at a time, a hit to miss ratio after completing every level, and a Challenge Stage appearing every three stages that has enemies fly on the screen in a set pattern without firing or trying to collide with you. If every enemy is hit in a bonus stage, the player is rewarded 10,000 bonus points. If the player misses any enemies in the bonus stage, every hit will be 100 points per enemy.
The main new feature for Galaga is enemies having the ability to capture your spaceship. A boss enemy, who take two hits to kill, will sometimes try to capture your fighter by using a tractor beam. If caught, your fighter will become part of the formation acting as a satellite for the Galaga boss that captured it. That fighter then becomes an enemy that can be destroyed. While being captured, the player can shoot until their spaceship touches the enemy. Players will take this opportunity and shoot the enemy to destroy it before it manages to capture your fighter. A captive ship can be released by killing the boss Galaga that is holding it. The ship that was captured will combine with your current fighter who who freed it. This will give the player double the firepower, but will also double your size, making you an easier target. If the captor is destroyed while in formation, the ship does not get rescued and will fly off after diving. If the player does not destroy the ship after the dive, it will appear in the very next level acting as a satellite again with a different boss Galaga, and then be able to be rescued again.
UPC: 8-54112-02347-7
Platform: NES
Players: 1-2
Condition: Used
Genre: Shooter
Region: NTSC (North America)
Rating: Everyone 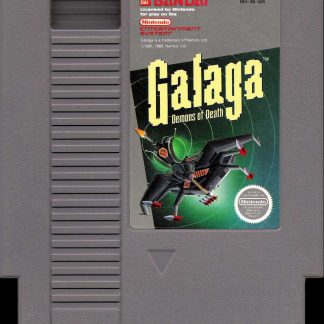