Monster Truck Rally NES Game Cartridge
Monster Truck Rally was released for the NES in 1991. Realtime Associates developed the game and INTV Corp published it. The game was one of the minorities of NES games that supported the NES Satellite accessory and Four Score, which would allow four players. The player will take control of one of the monster trucks and choose to go through the nine events one by one or the rally, which will go through them all. The nine levels in the game are a hill climb, a drag race, a bog, a car crush, a tug-o-war, a sled pull, a draw bridge, the donuts, and a combo course.
During a hill climb, the player will race on a track that is mainly comprised of hills that are steep. A drag race will offer the player to drag race on a straight road that is long. A bog event has the player race with watery bogs on the track. In a car crush, the player will race down and up straight roadways, having them drive over cars in rows that will be lined up ready to be crushed by a monster truck. In a tug-o-war event, the player’s monster truck and an opponents monster truck will be tied together. Both will face the opposite direction and the truck who pulls the other across a line that’s on their side behind them will win. A sled pull will have the player pull a sled that is weighted down a path. While progressing through the path, more weight will be added to slow the player’s truck down. If a bridge goes down, a truck will be able to pass, if a bridge is up, a player will have to wait for it to come back down for them to continue. The donut event will feature a race on a small track in a donut shape against another truck. A combo course will involve all the past events thrown into one race. The player will also be able to create their own race track or they can have the game randomly create one.
UPC: 0-18571-09103-7
Platform: NES
Players: 1-4
Condition: Used
Genre: Racing
Region: NTSC (North America)
Rating: Everyone 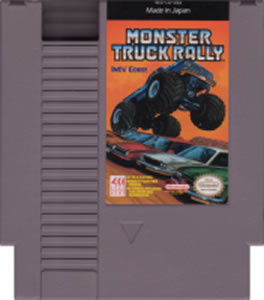