Punch-Out NES Game Cartridge
Punch Out!! was released for the NES in 1990, originally released in 1997 as Mike Tyson’s Punch Out!!. Genyo Takeda, producer of the arcade version, directed the NES ports. Due to the power limitation of the NES, Takeda and the other producers had to make modifications. The first was changing the player’s boxer. In the arcade, the boxer was wire framed so the player could see the opponent through him. For the NES, they shortened the boxer so players would be able to see the opponents above the big head room the player’s boxer had. The NES version also added some extra things the arcade did not have. These were an actual plot, background music being played while boxing, cutscenes that were animated, and passwords for the player to continue their progress.
The player’s boxer is Little Mac, who is fighting up through the World Boxing ranks. The goal of the game is to fight multiple fictional boxers in three separate circuits to get to the Dream Fight that will be against an extremely skilled boxer. In this version of the game, it is the fictional boxer, Mr Dream. There are 14 opponents total, including Mr Dream at the end. Three opponents are in Minor Circuit, four opponents are in Major Circuit, six opponents are in World Circuit, and then the final fight after those circuits. Three of the six World Circuit fights will have previous opponents with newer moves. Most of the character sprites from the opponents are used twice, with the colors, special moves, and head image changing. The only opponent that does not share sprites with another is King Hippo.
Little Mac’s arsenal is limited compared to a lot of the opponents, which only include right and left jabs, right and left body blows, and an uppercut that is powerful. His uppercut can be used when the player gets a star. The star is earned by counter punching opponents right before or right after specific attacks. Start will have Little Mac use the uppercut. He can also defend by dodging right or left, ducking, or blocking punches when putting his guard up. He also has a heart level, which will decrease when he is hit, blocking punches, or when he throws a punch and misses or it’s blocked. When the heart container reaches empty, Little Mac will temporarily become pink, leaving him unable to punch, but he can still dodge, block, and duck. The hearts can refill by dodging punches from the opponent. If knocked down, the player will lose all hearts, but some will be refilled once they get back up.
A fight can end in a KO, TKO, or decision. A KO is when a fighter cannot get up in 10 seconds when they are knocked down. A TKO, or technical knockout, is when a fighter is knocked to the ground three times in the same round. If both fighters are still standing at the end of all three rounds, a decision from the judges is made. To win a decision, the player will need to get more points than a certain total by landing punches on the opponent or knocking the opponent down. The total points needed will vary with the boxers. There are certain fights that cannot be won by decision and the player will lose automatically if they don’t knock out the opponent. Mac can recover three times when fighting in a match. If Mac is knocked down four times, he will not be able to recover and the player loses by knockout.
If the player loses a ranked match, they will be given the chance for a rematch. If the player loses a title match, his ranking will fall one spot in the Major and Minor and two spots in the World. Unless the player is ranked at the bottom, losing the rematch will cause the player to fall one spot, forcing the player to fight back up the rankings. If the player loses three times, not having to be consecutive, the game will end. The game will also in if they lose in the final Dream Fight, even if no losses were recorded previously.
UPC: 0-45496-63061-4
Platform: NES
Players: 1
Condition: Used
Genre: Sports
Region: NTSC (North America)
Rating: Everyone 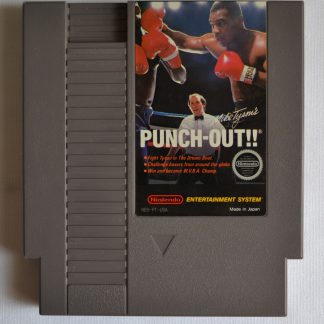