Raid on Bungeling Bay NES Game Cartridge
Raid on Bungeling Bay was released for the NES in 1987. It was developed by Will Wright and published by Hudson Soft. This was Wright’s first game he designed. He continued on developing the game’s editor for his own personal toy since he enjoyed the editor so much. He did urban planning research and realized that other people might enjoy doing construction and building the cities themselves. This resulted in a simulation that was fancier and eventually turned into SimCity.
Apart from the game offering an overhead view that was 2D over terrain that had a little more complexity than other games, it was pretty much a shoot ’em up inside a simplistic war zone. The player will control a helicopter launched from the aircraft carrier. They are to bomb the six factories that are scattered across the islands that are located on a little planetoid. The planetoid is occupied by people from the evil Bungeling Empire, which are Borderbund game’s usual villains. The player will also need to fend off the escalating counterattacks from a battleship, guided missiles, fighter jets, and gun turrets. There is also an island that is hidden for a player so they can reload on it. If the player fails, the Empire will develop the war machine that will take over planet Earth. A player needed to attack the infrastructure while trying to defend their aircraft carrier that was also their home base.
The game will offer interesting insights from Wright’s design, who later went on to make SimCity. The factories and islands in this game would behave in a manner that was sophisticated and would closely resemble SimCity. Factories would eventually grow over time and develop newer technologies to fight against a player. The game also had visible signs that the islands had interdependency, like supply boats that would move between them. For the player to beat the game, they will need to prevent bomb all factories as fast as they can to prevent escalation of the enemy advancing on their technology. If the enemy was left alone too long, factories would end up creating new weapons to have the player overwhelmed.
UPC: 7-55030-01223-2
Platform: NES
Players: 1-2
Condition: Used
Genre: Shooter
Region: NTSC (North America)
Rating: Everyone 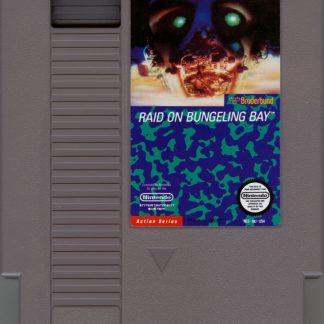 You're viewing: Raid on Bungeling Bay NES $19.99
Add to cart