Low G Man NES Game Cartridge
Low G Man was released for the NES in 1990. It was developed by KID and published by Taxan. The game will include a password system for the players to start where they left off after getting game over. The game takes place in 2284 with the human race having perfected space traveling and is now colonizing the entire galaxy. All types of robots help out by exploring newer planets. Some planets were even dedicated for manufacturing more robots. One day an alien race took control of a planet that was manufacturing robots. The aliens then reprogrammed all the robots being manufactured to destroy all the humans. It will be up to the player to go to the robot manufacturing planet and take it back from the aliens who took it.
The game was considered unusual for a sci-fi game because instead of a normal laser gun for the player’s weapon, the freeze ray was used and it did not do any damage to the enemies. When the enemies became frozen, a player would have to stab the enemy from the bottom or top with a spear that extended. Other weapons that were included were bombs, force waves, boomerangs, and fireballs, which can be found by destroying specific robots. Some of the robots are riding inside of vehicles. If the player destroys the enemy driver, they can take over the vehicle to help them get through a mission. The player will have a low gravity backpack that will give them the ability of jumping higher than a normal human possibly could. At maximum power, it will reach three total screen heights, allowing a player to destroy enemies and not have to freeze them.
UPC: 0-45496-43011-5
Platform: NES
Players: 1
Condition: Used
Genre: Platformer
Region: NTSC (North America)
Rating: Everyone 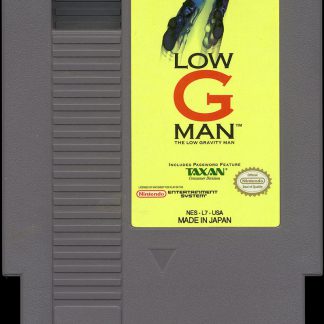