Airwolf NES Game Cartridge
Airwolf was released for the NES in 1989. It is based a television show with the exact same name. The game will have the player inside a helicopter’s cockpit code named Airwolf. The player will need to shoot enemy aircrafts down and rescue the prisoners. There are thirty missions with each having the objective of rescuing prisoners that are being held in captivity inside the enemy bases. The layouts of every level will change while progressing. Three types of bases are in the game. Home base is where the player has a choice to repair any damage or refuel their helicopter. The enemy airfield is where a lot of enemy crafts will take off of. The player can destroy it, lessening the number of enemy aircrafts chasing the player. Then the prisoner base is where prisoners are held. The player will need to land Airwolf successfully to rescue a prisoner.
Airwolf will have missiles and machine gun to fight off the enemy crafts. To successfully finish a mission, all the prisoners will need to be rescued by the player and then reach the level’s border without having lost all their lives. The game’s musical score has been praised by critics.
UPC: 0-09726-73106-9
Platform: NES
Players: 1
Condition: Used
Genre: Shooter
Region: NTSC (North America)
Rating: Everyone 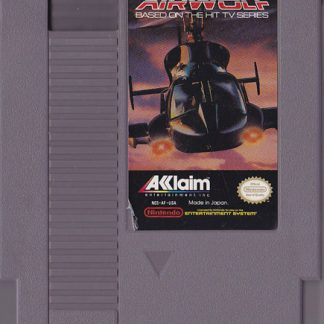