Shadowgate NES Game Cartridge
Shadowgate was released for the NES in 1989. It was developed by ICOM Simulations and published by Kemco. The game was named after the setting in Castle Shadowgate which is the evil Warlock Lord’s residence. The player will be tasked with defeating him to save the world and prevent the Warlock from summoning a demon from hell, Behemoth.
At the game’s start, the information provided by the game is that the last thing the player remembers was being in front of Lakmir, a wizard, as he wildly gestured and then chanted in some archaic tongue. The player then finds themselves looking at forest’s entryway that lies at it’s edge. The player will need to obtain information about the game’s world by reading any books or scrolls they see and examining objects. Reading some in game books and some scrolls will be necessary to complete the game. Others will give exposition only about the game’s world of Shadowgate. Reading the Before Shadowgate book, the Shadowgate Saga: Raven comic book, and then playing the two sequels, which are Beyond Shadowgate and the Nintendo 64 game Shadowgate 64, to have more details revealed.
The player will need to solve puzzled spread around the castle so they can proceed to the chamber of the Warlock Lord. Because of the perilous nature of the castle, a minimum of one torch will need to be lit and be in a player’s possession through the entire game. If the last torch is ever extinguished, the player will stumble and break their neck. This will cause them to continue from the area they died in. The game has a finite amount of torches throughout gameplay, effectively acting as a timer. The items the player can find include slings, swords, and other weapons that are ancient. These weapons will not be able to be used for striking, but the player can click on them at the right time to give the fatal blow to certain enemies.
The game is known for having many opportunities to die, including dragon’s breath burning the player, a cyclops attacking the player, being sucked into broken mirrors that put the player in outer space, acidic slime dissolving the player, a wolf woman mauling the player, sharks eating the player, and also suicide. Pretty much any action the player takes that is the incorrect solution for a puzzle results in fatality. Text would graphically describe the deaths along with humorous and sardonic comments. Many puzzles will rely on the player using trial and errors. This is overcome with the ability of saving a game. Game texts and books will provide subtle hints. The NES game will replace these with a hint feature giving vague clues that are about what will be noteworthy inside any of the given rooms inside the castle. This feature will become more useless as the player advances, eventually just turning into messages that are encouraging by the end of the game. The NES game will also carry a distinction of one of few games on the NES being available in the Swedish language.
UPC: 0-44499-00005-9
Platform: NES
Players: 1
Condition: Used
Genre: Action and Adventure
Region: NTSC (North America)
Rating: Everyone 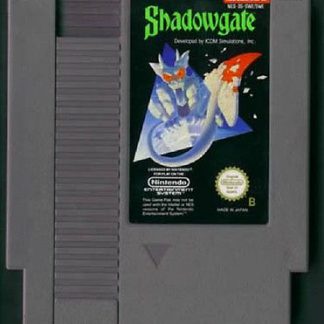