Mission Impossible NES Game Cartridge
Mission: Impossible was released for the NES in 1990. It was developed by Konami and published by Ultra Games. The second TV series of Mission: Impossible is what the game is based on. The IMF team’s objective is trying to figure out a kidnap case. The terrorist group called The Sinister 7 kidnapped Shannon Reed, an IMF operative and a scientist who is well known. The chase takes place through the Venice canals to goes to Swiss Alps. The team will need to infiltrate many hostile installations that have multiple floors in pursuit for saving the hostages. While fighting through every area, the player will need to get ID cards and obtain information. Progress will be blocked every turn with raw sewage, scorching steam, acid flames, poison gas, and high voltage electricity.
The game will be played from the top down view, with the player choosing one of three operatives from the IMF, who are Nicholas, Grant, and Max. All three will have a different skill set that is necessary for completing the game. They will each have tow different weapons that the player can interchange according to current surroundings. If one of the agent’s life runs empty, the next IMF agent in line takes their place. Once an area is completed successfully, the agents that were knocked out will rejoin the game at the next area’s beginning. They can also be switched out anytime during the game.
There will be six areas in the game. The first area and last area will have two stages a piece. Two areas in the game will auto scroll, having all three of the agents in gameplay simultaneously. At the start of the game, the player will be on a street with civilians that need to not be hurt. Doing this will have the mission end highly embarrassingly since local authorities will proceed on arresting the attacker. When the player is infiltrating one of the enemy hideouts, discretion will be advised since being detected by a surveillance system brings security guards.
UPC: 0-83717-12009-4
Platform: NES
Players: 1
Condition: Used
Genre: Action and Adventure
Region: NTSC (North America)
Rating: Everyone 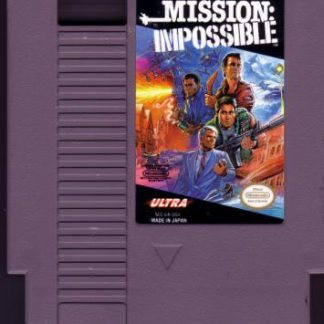