Solar Jetman NES Game Cartridge
Solar Jetman was released for the NES in 1990. It is the third game in the Jetman video game series. The original title of the game was Iota before Rare told the developers they had to change it. It received mostly positive reviews when it was released. The protagonist Jetman will need to maneuver his spaceship through caves on a variety of planets while looking for Golden Warpship pieces. The game’s view is from the side in a horizontal fashion, with the gravitational pull being different for every planet. This will have Jetman’s spaceship subjected to different amounts of inertia. Like the first two games, the player will need to keep their spaceship filled with &nbsp;fuel so they can progress through the levels.
The style of gameplay is multi directional shooting and is presented in the side view horizontally, like the past Jetman games. The setting of Solar Jetman is after Lunar Jetman. The Golden Warpship that he is trying to complete with the pieces has the capability of interstellar traveling. Jetman’s pod is controlled by the player clockwise or an anti clockwise fashion. Inertia will pull the pod when on a planet but the physics will depend on the gravity level of the planet. The gravity pull will change in each level, making stable flight a challenge and maneuvering Jetman’s pod will become more difficult as the player progresses in the game.
There are twelve planets and a hidden planet in Solar Jetman, with each one having its own enemies and gravity pull. The goal of Solar Jetman is to try and navigate the caverns with jetpods that are launched from the mothership, trying to bring back one piece of the mythical starship from every planet and have enough fuel for getting to another planet. Items can be collected using a tow cable, making flight harder because of dragging the item. The item will eventually be released once above the mothership or inside a wormhole deeper inside the cave. Destroying enemies and retrieving valuable items will earn the player points, which the player can spend after every two stages for buying power ups. If one of Jetman’s pods are destroyed, he will eject himself out and begin to walk around inside a vulnerable but agile spacesuit. Another pod may be collected once the player gets back onto the mothership. If Jetman is killed outside of a pod, the player will lose a life.
UPC: 0-45496-43004-7
Platform: NES
Players: 1
Condition: Used
Genre: Shooter
Region: NTSC (North America)
Rating: Everyone 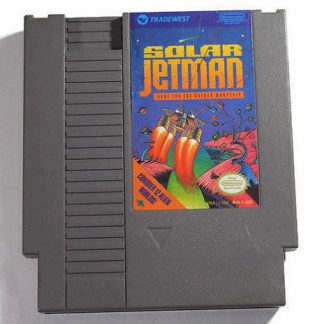