Spy vs Spy NES Game Cartridge
Spy vs Spy was released for the NES in 1988. The game is based on the cartoon strip with the same name from MAD Magazine, being about two spies with slapstick antics that are trying to kill one another with elaborate and complex traps and some weapons. The goal in this game is trying to collect different secret items that are inside a briefcase and try to escape a building before time runs out or before the other spy escapes. When searching for items, traps that the players have can be put in different locations to kill the other spy. Both spies will have their own countdown timer that will subtract 30 seconds every time they die.
The spies will be in an embassy that is constructed with interconnected rooms that are laid out onto a grid type pattern. More rooms will be on the higher levels, making them a bigger play area. There is close range combat that can be done when the D-Pad is wiggled right and left or down and up when both spies are close to one another. The spies will be able to place the traps inside furniture and doors that are in the play area. A trap will be triggered when one of the spies search furniture for items or when they open a door that is booby trapped. This will result in animation cartoon style, showing the spy being electrocuted, blown up, etc. The spy will then float up like an angel to heaven. This game is a part of the trap ’em up genre, including other games like Lode Runner, Space Panic, and Heiankyo Alien.
A new strategy will be introduced when the trap each spy is able to use is limited, and allowing both spies to trigger any of the traps. Some of the furniture will have remedies for specific traps. This will allow the player to defuse a trap, but only one a time can be fetched.
UPC: 0-44499-00001-1
Platform: NES
Players: 1-2
Condition: Used
Genre: Action and Adventure
Region: NTSC (North America)
Rating: Everyone 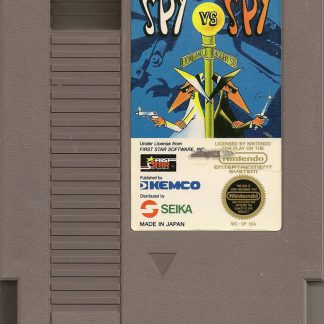