Star Wars The Empire Strikes Back NES Game Cartridge
Star Wars: The Empire Strikes Back was released for the NES in 1992. It is the sequel to NES’s Star Wars. Since the game was released near the NES’s end of its life cycle, there was not a Return of the Jedi game made for the NES. The goal for the game is trying to destroy a Probe Droid in the first level. The player then moves on to escape an ice cavern infested with Wampas. The Battle of Hoth is the next step after the ice cavern. When that battle is finished, the player will go to Dagobah to meet Yoda and train. After training, the player will go to Cloud City to try and save his friends from the clutches of Darth Vader. The player as Luke Skywalker will have a lightsaber or blaster pistol for fighting. Luke will also learn Force Powers that will help during missions.
UPC: 0-09119-91014-9
Platform: NES
Players: 1
Condition: Used
Genre: Platformer
Region: NTSC (North America)
Rating: Everyone 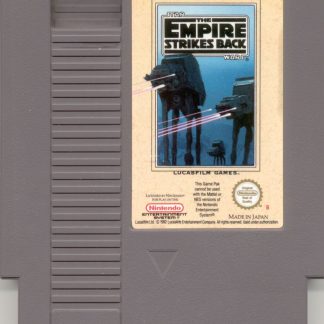 You're viewing: Star Wars The Empire Strikes Back NES $49.99
Add to cart