Stealth NES Game Cartridge
Stealth ATF was released for the NES in 1989. The game was developed by Imagineering Inc and was published by Activision. The player will take control of an F-117A, also known as a Nighthawk. Every mission begins and ends with the player taking off and landing the plane. If this is failed after finishing the main objectives, the mission will need to be replayed. The game can be either one or two players alternating. The view while flying the plane is from the cockpit inside. Gameplay will give the player complete freedom of flight movement. The terrain in the game will be infinite, with enemies reappearing on radar whenever they go out of the radar’s range. The locations the player will fly to are the Pacific, Alaska, Middle East, etc. The music can be turned off with the select button to play with only flight sounds.
The goal of every mission is defeating a certain amount of enemies, with the targets always being in the air. The weapons that can be used are the cannon, which has unlimited ammo, and missiles, having 8 for every mission. If a missile is shot at the player, they can enter stealth mode to try avoiding it. This is done by pressing start, but it can only be used once per mission. Stealth will turn off automatically when the danger has passed. They player will need to be aware that the plane takes, the remaining missiles, and the plane’s altitude to prevent hitting the ground and crashing. A bonus round will be offered if a mission is finished perfectly, where the player will try taking down enemies as fast as possible.
UPC: 3-00021-08371-7
Platform: NES
Players: 1-2
Condition: Used
Genre: Simulation
Region: NTSC (North America)
Rating: Everyone 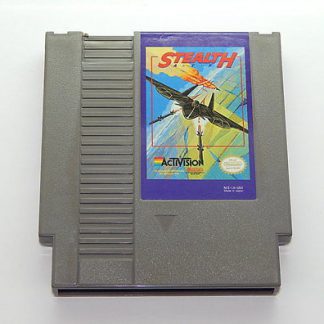