Bandai Golf NES Game Cartridge
Bandai Golf was released for the NES in 1989. It was developed by TOSE and published by Bandai. The game was named after a golfing course on the Pacific Coast of California called Pebble Beach. It implements real physics on top of the regular golf rules while consistently placing the players against harsh winds on Pebble Beach. Like the real counterpart in the game, the Pacific Ocean will play a major role in the course’s gameplay and will add difficulty for the player. The game is one player or two players and both will be able to choose their handicap. Each of the game’s 18 holes will &nbsp;have familiar hazards like water hazards, slopes, and bunkers. The player will have to compete against Mother Nature hazards like the wind conditions changing and like mentioned earlier, the ocean.
Once the player tees off, there will be multiple decisions for them to make. The player can also check their score card and see how they are doing. It will tell you each of the hole’s distances in yards. The computer will then give the player a view from the sky and a cross section view for every hole, including close ups on the hole. The correct club will need to be selected for every shot. The player will then control their shot for distance, power, and slice or hook that the player wants when hitting the ball. Once making the shot, the computer will tell the player the kind of lie they have including the distance remaining toward the hole.
UPC: 0-45557-07200-1
Platform: NES
Players: 1-2
Condition: Used
Genre: Sports
Region: NTSC (North America)
Rating: Everyone 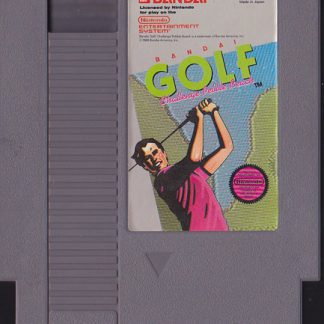