Castlevania II NES Game Cartridge
Castlevania II: Simon’s Quest was released for the NES in 1988. It was developed and published by Konami. It was the second NES Castlevania game that followed the first Castlevania. The game take place after the first Castlevania with the player taking control of Simon Belmont again. This time, he is on a quest to take away a curse that Dracula put on him from the first time they encountered each other. Dracula’s body was separated into five parts and Simon will need to find them and take the parts to the caste ruins to defeat and seal him. The goal of Simon’s Quest is traveling to five different mansions to locate Dracula’s body parts and an item called Magic Cross. The parts are utilized to help support the player. An example is Dracula’s Rib is a shield that is used to block projectiles fired from the enemies. When all the items required are collected, it will allow the player to get rid of the blockade that is in front of Dracula’s castle. This will lead to the final boss fight with Dracula himself. When he is defeated, the game will have three possible endings, with all three being based on how long it took to finish the game. The game’s best ending is achieved if the player completes the game within eight game days.
The gameplay will change from the regular platforming style to more of a nonlinear gameplay like the game Metroid, but with many RPG elements like a world map the player will be free on exploring and revisiting. The player can talk to townspeople that will give them clues or lie to them. Merchants will sell the player items for either exploring unreachable areas or fighting enemies. The items are paid for with hearts that the player collects that defeated enemies will drop. The player can also buy other whips in different locations. A Leather Whip is the player’s first weapon and can be upgraded to more powerful ones with every new buy. This game will introduce an experience system that will be increased when hearts are collected. After collecting enough hearts, the player’s level and max health will improve.
The time period in the game will cycle between day and night which will affect the game and what Simon encounters. During daytime, enemies outside of the towns will be weaker. During nighttime, the enemies will get stronger and do more damage on the player’s health. Enemies at night will drop a larger amount of hearts when defeated. The merchants and townspeople will be replaced with zombies and can no longer be talked to. There are some elements that remained from the first game despite the gameplay change. This will include Magic weapons, the secondary weapons beside Simon’s whip. All of them will be used differently. Like most of the Castlevania games, some of the magic weapons will require hearts to use. Holy Water returns from Castlevania, which is a glass that disintegrates walls containing hidden items. The Diamond makes its first appearance and will attack enemies and bounce off any walls surrounding the player.
UPC: 7-81317-03313-3
Platform: NES
Players: 1
Condition: Used
Genre: Platformer
Region: NTSC (North America)
Rating: Everyone 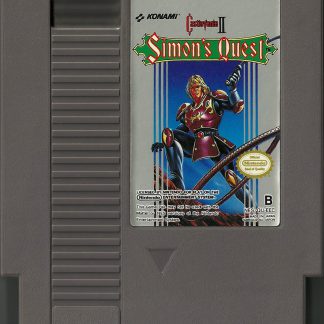