Super Pitfall NES Game Cartridge
Super Pitfall was released for the NES in 1987. It was developed by Micronics and published by Activision. It became Activision’s first game created by Nintendo that they published, and it was also based on the earlier Activision series of Pitfall! from the console Atari 2600. It was re released later without Rev-A above the FCI game publisher. There was a sequel planned that was called Super Pitfall II but was cancelled not too long later.
The game is the loose remake of the game Pitfall II: Lost Caverns. The objective is moving the character Harry through some mazes to locate a diamond called Raj, and then save Rhonda and Quickclaw, his niece and sidekick respectively, both of which became lost inside the caverns. Harry’s quest will become more difficult when he finds out Quickclaw has been imprisoned inside a cage that will need a key, which Harry will need to find. He also finds out Rhonda has been changed into a stone. Harry will need to find the magic potion capable of turning her back into a girl. After accomplishing the objectives, the player will need to return to the game’s beginning point. The player will have a limited amount of lives and will have a gun that they can shoot enemies with that are inhabiting the caverns. Ammunition will be limited but more can be found scattered throughout the caverns. The hardest enemies are arguably the three cavemen that require multiple bullets to kill. The player will be able to accumulate gold bars to obtain extra points. To complete the game, the player will need to memorize, or map out, many warp zones and hidden keys. Revealing every secret will require precise jumping, making the game’s exploration very difficult.
UPC: 0-47875-70001-7
Platform: NES
Players: 1
Condition: Used
Genre: Platformer
Region: NTSC (North America)
Rating: Everyone 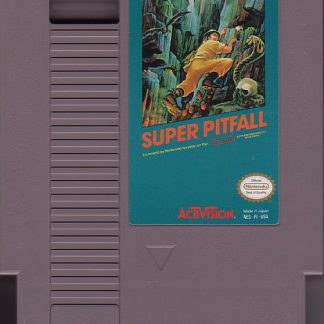