Super Spike V’Ball NES Game Cartridge
Super Spike V’Ball was released for the NES in 1990. It was developed by Technos and published by Nintendo. It was originally an arcade game that was released in 1988 under the title U.S. Championship V’Ball. The NES game will feature many key differences compared to the arcade version. On the NES, the player will now be able to choose their teams. In single player mode, the teams available are Murphy and George, the team with well balanced stats, Jimmy and Billy, who are also the two protagonists from Double Dragon, are defensive players with bad spiking power, and Michael and Ed, the fastest players having hitting power that is average. A tournament mode will be featured on the NES that will be against computer players. It can be played with someone else or alone. There is also a mode that allows four players.
There will be three different modes for tournament which are Exercise, American Circuit, and World Cup. Exercise Mode will be a match played against the game’s first team on a court with no crowd set on easy difficulty. American Circuit Mode will consist of five teams, which are Los Angeles, Las Vegas, New York City, Chicago, and Daytona Beach, set on the average difficulty. World Cup will have seven teams, which are team Japan, team Italy, team Australia, team Mexico, team Brazil, team Navy, and team USSR, in that order. This mode will be on the hard difficulty. There will be no setting for difficulty in the menu’s options since each of the three tournament modes will serve as a difficulty setting themselves.
Four more teams, all female, will be present for gameplay but will be inaccessible to players under the normal play conditions. A cheating device will need to be used to make the teams available to select. Though the female teams are completely playable, the images that represent the female teams when the player is on the selection screen will be missing, which results in graphics that are garbled being displayed instead.
UPC: 0-45496-63056-0
Platform: NES
Players: 1-4
Condition: Used
Genre: Sports
Region: NTSC (North America)
Rating: Everyone 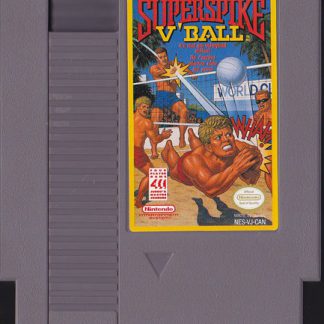