Thunder and Lightning NES Game Cartridge
Thunder and Lightning was released for the NES in 1990. It was developed by Visco Corporation and published by Romstar. It was also an arcade game released that same year. The game is similar to Breakout but will have characters like Thunder Warrior and Mr Chin, who will hold a stick above his head, using it as a paddle. If the ball the player is hitting touches a power up carrier, which are airplanes, submarines, or flying saucers, they will need to catch the power up that was released while still keeping the ball into play.
There will be eight power ups the player can obtain. The first is a glove, which will let the player catch a ball and release it by pressing A. The second is Long, which will extend the player’s stick. The third power up is a 1-Up, which will give a life to the player. The fourth power up is a missile, which will give the player the capability of firing a missile by pressing A. if the player catches two missiles, they will be able to launch two missiles at the same time. The fifth power up is a Big Ball, which will have the ball enlarged and will blow through any block type in its way. The sixth power up is Slow, which will slow the ball’s speed. The seventh power up is the 3 Ball, which will split the ball into three separate balls. As long as the player keeps all three in play, they will always have the three balls. The eight power up is the 6 Ball, which acts the same as the 3 Ball, except will have 6 instead.
There will be some hostile characters that will sometimes appear and try to have the player mess up. The game will have 5 types of these characters. The first is a Sea Anemone, which will have the player’s ball separated into two balls that are smaller if it captures their ball. The second is an Octopus, who lives underwater inside a vase that is ancient. If the ball hits the vase, the octopus comes out and will try to latch onto the player’s stick. If it succeeds, it will weigh the player down and cause them to have slower movement. The third is a Turtle, which walks over to the wall, then transforms themselves into more blocks to have the player’s progress hindered. The fourth is the Bird, which if hit with a ball, will lose control and smash through walls before it flies away. The fifth will be Thunder Warrior. Once he is hit, he releases lightning bolts that will float in a circle around him. The bolts will destroy walls but will paralyze the player momentarily if they are hit.
UPC: 0-95474-16010-7
Platform: NES
Players: 1
Condition: Used
Genre: Action and Adventure
Region: NTSC (North America)
Rating: Everyone 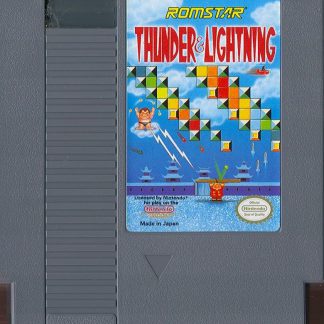 You're viewing: Thunder and Lightning NES $29.99
Add to cart