Magic Darts NES Game Cartridge
Magic Darts was released for the NES in 1991. It was developed and published by Romstar. The game will have six different dart games. These games are Half It, Round the Clock, Count Up, 701, 501, and 301. In the 701, 501, and 301 games, the player can choose double rules or open rules. A player can choose one of the ten characters available. Some of the character choices available are an alien, a robot, and a monkey. Throwing darts will depend on four factors. These factors are power, angle, curve, and position. The game can be played with four players against each other. While playing the 701, 501, and 301 games, the goal for every player is trying to get their score down to zero exactly from whichever amount was chosen to play from.
In the game Count Up, the player will compete for the highest score among other players. In the game Round the Clock, the player will need to hit all the numbers 1 through 12 in order sequentially. During Half It, each player will start with forty points. Every player will have three different chances on hitting the numbers assigned to add points to their score. If a player fails to hit every assigned number, their points will be halved. The player who has the highest score will win. The numbers that are assigned are the bullseye, twenty, nineteen, triple ring, eighteen, seventeen, double ring, and sixteen.
UPC: 0-95474-19010-4
Platform: NES
Players: 1-4
Condition: Used
Genre: Sports
Region: NTSC (North America)
Rating: Everyone 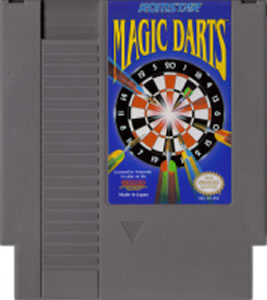