Athena NES Game Cartridge
Athena was released for the NES in 1987 and was &nbsp;published and developed by SNK. The main character Princess Athena has appeared in fighting games as one of the secret characters or an assistant to Athena Asamiya, her descendant, who is a main character who frequently appears in the SNK games. A lot of the elements in the game are inspired with ancient Roman culture or Greek mythology like enemy designs, items, equipment, and weapons. Princess Athena got her name after Athena, a Greek goddess, and Dante is derived from Cerberus.
Athena was a young and headstrong princess of Victory, a heavenly Kingdom. She became bored of her monotonous daily lifestyle inside the palace, desiring exciting adventures. She opened a door one day that should not be opened located in the castle’s basement. It was said the door leads to a dangerous place. As she went to go across the doorway, she fell from the sky into another realm that is called the Fantasy World. Dante, the evil emperor, dominated this realm. Athena’s flowing dress became lost when the wind caught it while she was falling. Her perilous adventure began when she landed inside a wilderness that is overrun by warriors that are beast like and other dangers. She then prepared to arm herself and fight for her own life since there was no choice but to fight Dante and each obstacle in her path, freeing that kingdom and making back to hers alive.
When landing, Athena is almost nude and unarmed, only having her kicks to fight off monsters that approach her. She can collect the enemies weapons after she kills them. There is also a chance of finding headgear, shields, and armor that can cover her body. These items are lost however when the player is hit. During the journey, the player will need to climb, leap, and fight through eight worlds that are hazardous, with each world leading to a large enemy that will need to be defeated before the player can proceed to the next world. When using specific weapons like the hammer will allow Athena to destroy stone blocks, which will sometimes reveal not just armor but magical items like Mercury’s sandals. When worn, the sandals will allow the player to leap further.
UPC: 0-91199-00512-9
Platform: NES
Players: 1
Condition: Used
Genre: Platformer
Region: NTSC (North America)
Rating: Everyone 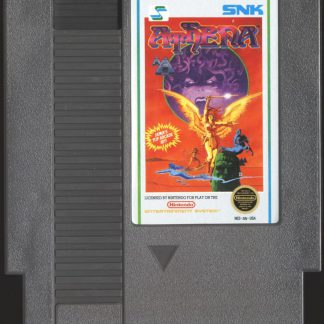